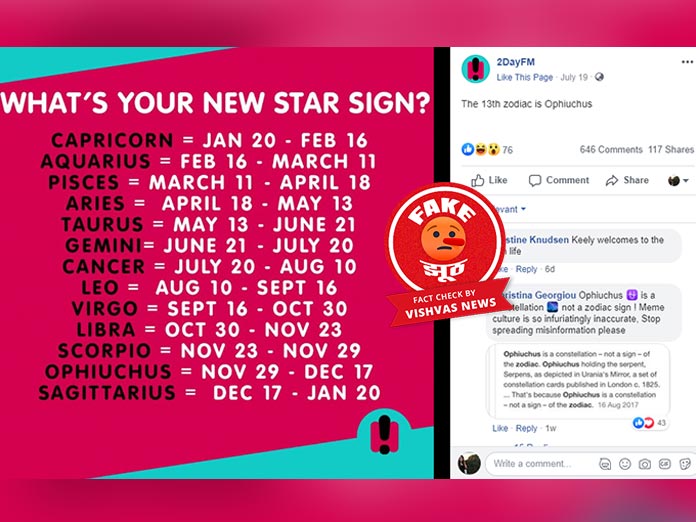 A post doing rounds on social media claims that NASA has added a 13th Zodiac sign named “Ophiuchus” to the list of existing 12 Zodiac signs. The archived version of the post can be checked here.

On July 17, 2020, NASA tweeted: We see your comments about a zodiac story that re-emerges every few years. No, we did not change the zodiac. When the Babylonians invented the constellations 3,000 years ago, they chose to leave out a 13th sign. So, we did the math: https://go.nasa.gov/3gZnBwK

When we clicked the link given in the tweet we landed to the website of NASA where the agency has debunked the claim calling it a fake news.

It stated: “Did you recently hear that NASA changed the zodiac signs? Nope, we definitely didn’t …Here at NASA, we study astronomy, not astrology.”

Where did Ophiuchus name come from?

As stated in NASA website, The Babylonians lived over 3,000 years ago. They divided the zodiac into 12 equal parts – like cutting a pizza into 12 equal slices. They picked 12 constellations in the zodiac, one for each of the 12 “slices.” So, as Earth orbits the sun, the sun would appear to pass through each of the 12 parts of the zodiac. Since the Babylonians already had a 12-month calendar (based on the phases of the moon), each month got a slice of the zodiac all to itself.

But even according to the Babylonians’ own ancient stories, there were 13 constellations in the zodiac. So they picked one, Ophiuchus, to leave out. Even then, some of the chosen 12 didn’t fit neatly into their assigned slice of the pie and crossed over into the next one.

Vishvas News contacted Ames Public Inquiries, NASA. As per its spokesperson, “the information in the viral post is not true. NASA has not added 13th zodiac sign.”

This is not the first time the post has gone viral. The post is doing rounds on social media since 2011.

The post is shared on Facebook by a page named 2DayFM. When we scanned the page we found that the page has 500,720 followers.