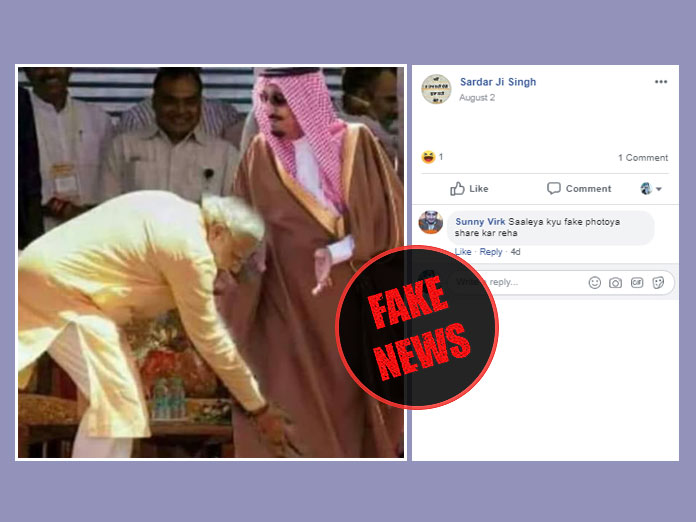 In our investigation, we found the picture’s claim to be fake. In the original picture, PM Modi was touching the feet of BJP’s veteran politician Mr. Lal Krishna Advani.

We started our investigation by uploading the viral picture in the Google Reverse Image tool. In the search results, we found the truth behind the viral picture. In our search, we found an article of Business Standard. Article’s headline was: ‘BJP files complaint against journalist for morphed Modi photo’

In this news article, they mentioned a case filed by BJP on a journalist for creating this fake image. This article was published in April 2016.

To move ahead in our investigation, we spoke to BJP’s spokesperson Amit Malviya regarding this image. Amit Malviya said, “This is a photoshopped image. In the original picture, PM Modi is touching L K Advani’s feet. These are attempts by those who want to dent Prime Minister Modi’s image of being a tough leader, under whose leadership India has become a major force on the global stage.”

In the end, we scanned the Facebook profile of user “Sardar Ji Singh” who posted this fake post. We found that user mostly updates posts regarding Punjab and Punjabi Culture.

Conclusion: In our investigation, we found the picture’s claim to be fake. In the original picture, PM Modi was touching the feet of BJP’s veteran politician Lal Krishna Advani.

Knowing the truth is your right. If you have a doubt on any news that could impact you, society or the nation, let us know. You can share your doubts and send you news for fact verification on our mail ID contact@vishvasnews.com or WhatsApp us on 9205270923