No Supreme Court order says the person who feeds the stray dog is liable in case of dog bites. The viral post circulating online is fake. 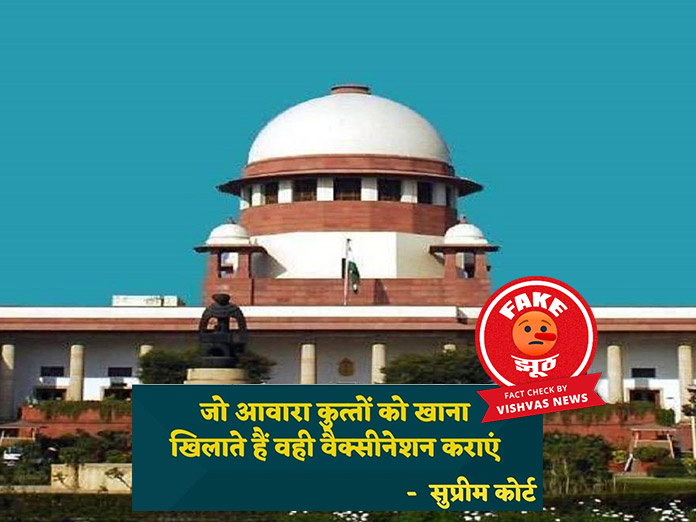 New Delhi (Vishvas News): A post doing rounds on social media claims Supreme Court has ordered that if a stray dog bites a human, the person who feeds that dog will be liable for compensation and treatment.

Vishvas News, in its investigation, found the claim to be falsely attributed to Supreme Court as no such statement was found in the court order on the official website.

Facebook user Amar Jit shared a post that stated, “There is a Supreme Court order for those who take care of stray dogs. In the cases of stray dogs roaming on the road and biting people, the Supreme Court said, Only those who feed stray dogs should get them vaccinated, and also bear the cost of treatment if someone bites them.”

Vishvas News first did a thorough search on Google with keywords – “SC observation Kerala stray dogs” – to find the related stories online. We found specific news reports that can be seen here, here, here and here. Most of the reports, dated September 9th and 10th, claimed that Supreme Court, in an oral observation, has remarked that those who feed the strays could be made responsible for vaccinating them. One of them also quoted Live Law for the claim circulated online, and we found the report here. On being contacted, M.A. Rashid, the Chief Editor of the portal, refused to comment on the viral claim.

Notably, the court’s bench of Justices Sanjiv Khanna and J.K. Maheshwari heard petitions in connection with the stray dogs’ menace in Kerala on September 9, 2022. The final decision is pending in court and will be heard on September 28, 2022.

To check the claim’s veracity, we opened the Supreme Court of India’s website and explored its case status section but found no mention of the above claim in the pending order.

In the course of further evidence, we found two reports, here and here, which refuted all claims of the SC making an order or oral observation in the pending case.

Speaking to us, one of the reporters Garima Prasher from Bangalore Mirror, said, “When I came across the news item on the SC’s remark during a hearing petition by a bench of Justices Sanjiv Khanna and JK Maheshwari, something appeared off. I have been following SC’s orders and remarks on stray dogs’ issues for some time, and this remark, stating ‘people who feed stray dogs could be made responsible for their vaccination and might be made liable to bear the costs if those animals attack people’ was not in line with SC’s previous orders on the matter, especially the Animal Birth Control rule of 2001. I decided to get to the truth and reached out to Shreya Paropkari, who was present at the proceeding. Shreya informed me that an online media house has wrongly quoted the submission of one party as a remark by Justice Khanna, and the item was subsequently picked up by other publications.”

While many media reports claimed that Justice Sanjiv Khanna orally observed that people who fed strays could be made responsible for their vaccination and might be made liable to bear the costs if those animals attack people, the lawyers physically present at the court proceeding say that no such suggestion or oral observation was made.

Gauri Maulekhi, intervenor in the matter, Trustee People for Animals, messaged us on WhatsApp, “Media has a responsibility to be fair and objective and report only facts. Misreporting in case of an animal welfare issue is even more damaging because the victims who bear the brunt can’t speak for themselves in court. The misreporting of the SC hearing has led to massacre of street dogs in several parts of the country for which certain media houses are squarely responsible. We understand that media agencies are in the business of selling news but they should not create hysteria which can affect the most vulnerable sections of the society i.e animals.”

Shreya Paropkari, Advocate, Humane Society International-India, who was also present at the SC proceeding, replied to us on call, “The Live Law article dated 9.9.22 regarding the hearing in SC Court no 12, item no. 37, reports that the SC suggested feeders be responsible for vaccination and bearing costs of dog attacks. No such suggestion or oral observation was made by the bench of Justices Khanna & Maheshwari. The bench stressed that any intervention has to be in accordance with ABC Rules which were read out to the bench by Sr Adv Krishnan Venugopal , Sr Adv Percival Billimoria, Sr Adv Anand Grover and Sr Adv Siddharth Luthra. Sr Advocate V Giri and AoR Mr Biju sought interim relief, which was not granted, and the bench kept the matter for 28 Sept, allowing sopping parties to file written submissions. When asked, ‘will you follow the law?’ Mr Giri explicitly conceded that the Animal Birth Control Rules would be followed The submission of one party is being reported in Live Law as a suggestion of the Apex court bench. This is unprofessional and unethical.”

Alwyn Sebastian, a lawyer representing Compassion Unlimited Plus Action (CUPA), shared, “The petition in the SC only concerns stray dogs in India and a need to regulate their population. The case in the SC specifically relates to the constitutional validity of the Animal Birth Control Rules, 2001 vis a vis the municipal laws. The SC has adjourned the matter for hearing, and no such order had been dictated or recorded imposing liability on feeders of street dogs who are only performing their constitutional duty.”

Maneka Gandhi, a member of Lok Sabha and animal rights activist, also rubbished the rumours by issuing a statement online. She can be heard saying in the YouTube video, “It has come to my notice that some extremely irresponsible news channels and social media people are spreading the rumour that Supreme Court yesterday said that animal feeders should be held responsible for bites and would have to pay for the same. This is totally fake news. We were at the court, as were all the top lawyers in the country. This was said by the person who has put the case in the Supreme Court, a person from Kerala. No judge reacted to it, no judge has said anything. Nobody said anything, this is 100% fake news.”

While scanning the social media of the Facebook user, Vishvas News found that he is an ex-health care worker from Germany, created his page on December 2, 2022, and is followed by 1.7K followers.

Conclusion: No Supreme Court order says the person who feeds the stray dog is liable in case of dog bites. The viral post circulating online is fake.