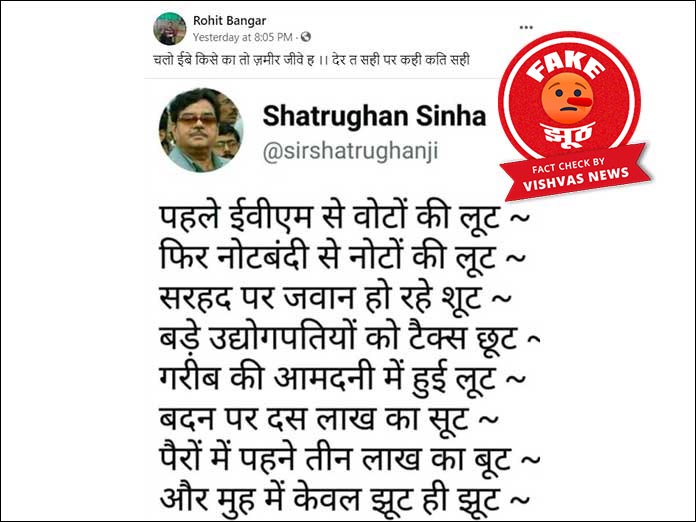 Facebook user Rohit posted a fake tweet in the name of Shatrughan Sinha on a group named ‘Jats Ki Mahfil’. The post reads: ‘First the plunder of votes from EVMs, then the looting of notes from demonetisation, shoots taking place on the outskirts, tax exemption for big industrialists, robbery in poor income,…”. Read the complete post here.

We further searched for the real Twitter handle of Shatrughan Sinha. It is @ShatruganSinha. We found that, on February 21, Shatrughan Sinha made a satirical tweet regarding petrol. Check the tweet here:

Vishvas News contacted our Smita Shrivastava, the correspondent covering Bollywood in Dainik Jagran. She confirmed that the viral post is fake. The account going viral in the name of Shatrughan Sinha is fake.

We scanned the profile of the Facebook user Rohit Bangar who shared the viral post. We found that the user is based out of Jhajjar, Haryana.

Conclusion: Vishvas News investigated and found the viral post to be fake. Shatrughan Sinha did not post the tweet that is going viral in his name.