Fact Check: No, the couple singing ‘Endless Love’ in viral video is not Ukrainian President Volodymyr Zelensky and his wife

Vishvas News investigated the viral video and found that the claim being made about the video is false. The video has nothing to do with Ukraine’s President Volodymyr Zelensky and his wife. 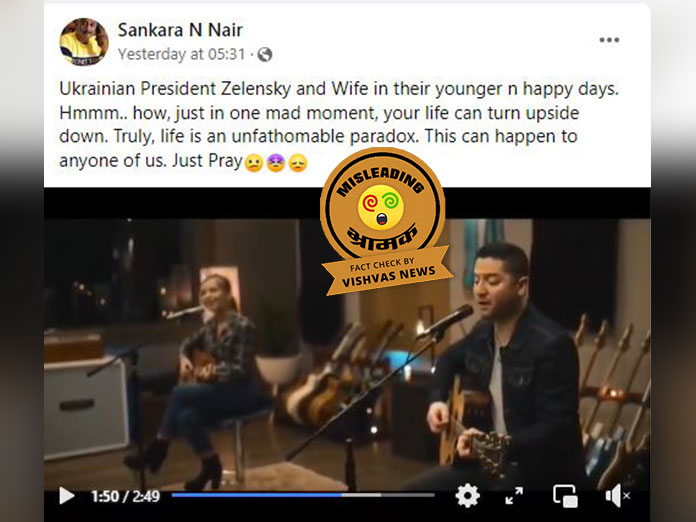 New Delhi (Vishvas News). A video of two people singing ‘Endless Love’ song is viral on social media. The post is claiming that the couple singing in the video are Ukrainian President Volodymyr Zelensky and his wife. Vishvas News investigated the viral video and found the claim to be false. The video has nothing to do with Ukraine President Volodymyr Zelensky and his wife. Both the people seen in the video are professional singers.

Facebook user Sankara N Nair(Archive link) posted this video and wrote “Ukrainian President Zelensky and Wife in their younger n happy days. Hmmm.. How, just in one mad moment, your life can turn upside down. Truly, life is an unfathomable paradox. This can happen to anyone of us. Just Pray”

Another user Elizabeth Kelly(Archive link) has also shared a similar claim on his account.

Vishvas News used the InVid tool to find out the truth of the viral video. With the help of this tool, we extracted several grabs of this video and searched them using Google reverse image. We found the original video uploaded on a YouTube channel named Boyce Avenue on 20 February 2022. According to the description of the video, the girl seen singing in the video is English singer Connie Talbot, while the boy is American singer Alejandro Manzano.

While taking the investigation forward we took the screenshot of the viral picture and compared it with the picture of Ukraine President Volodymyr Zelensky.The difference can be clearly seen in the picture.

Vishvas News has contacted Connie Talbot and Alejandro Manzano via email for confirmation. The news will be updated as soon as a reply is received from there.

Vishvas News, in the last phase of the investigation, conducted a background check on the profile that shared the viral post. We found that the user is a resident of Malaysia. Sankara N Nair has been active on Facebook since Nov 2017.

Conclusion: Vishvas News investigated the viral video and found that the claim being made about the video is false. The video has nothing to do with Ukraine’s President Volodymyr Zelensky and his wife.