Fact Check: No, these stones were not tied up by SAW 1400 years ago 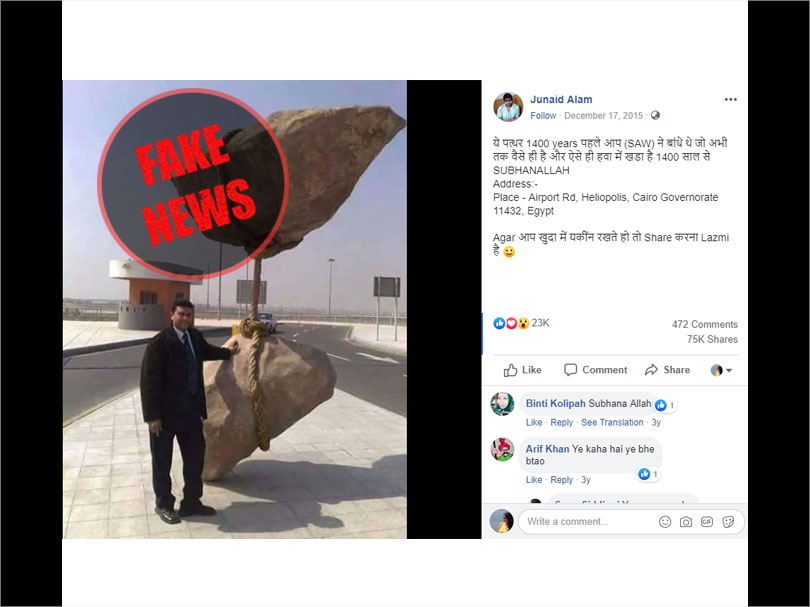 A Facebook photo is getting viral showing two stones one carrying the other with a rope. The photo claims that the stones have been tied 1400 years ago by SAW and are hanging since then. Upon investigation, it was found that the claim is false.

A viral photo on Facebook claims that two stones one carrying the other have been tied 1400 years ago by SAW. The address of the stones mentioned in the Facebook post is Airport Rd, Heliopolis, Cairo Governorate 11432, Egypt.

A fact check revealed that the claim is false. It is actually a sculpture made by Sha’ban Abbas, 2008, at Terminal 3, Cairo Airport, Egypt.

We saw the comments on the Facebook post. One of the comments stated that these stones were not made 1400 years ago. These were sculptures made in 2008 at Cairo airport.

We further investigated and landed to a stock photo describing the photo:

The description in the photo reads: Sculpture by Sha’ban Abbas, 2008, at Terminal 3, Cairo Airport, Egypt.

We found another post describing the stone sculptures as Abbas’s Cairo airport structure.

Upon further investigation, we landed to the following post which described: Abbas, a sculptor from Egypt became famous worldwide for his floating stone piece at Cairo International Airport.

On searching the post on Instagram we found a picture with a caption: Sculptures that defy gravity- “Flying Stone Statue” located at Cairo Airport by Shaaban Mohamed Abbas…

The hanging stones shown in the viral Facebook photo were not tied up by SAW 1400 years ago. It is actually a flying stone statue made by Shaaban Abbas and is situated at Cairo Airport.