No, this chocolate brand isn’t giving free chocolates in its 70th anniversary. The viral post is fake. 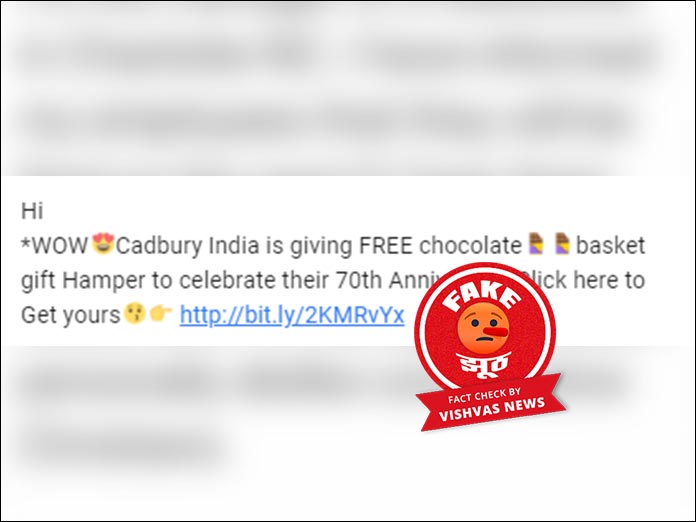 New Delhi (Vishvas News): Vishvas News received a post on its Whatsapp Chatbot for fact check. As per the post, Cadbury India is giving free chocolate basket gift Hamper to celebrate their 70th Anniversary. The message also prompted to click on a link. When Vishvas News investigated, we found the message to a scam. The link provided with the message wasn’t redirecting to the official website of Cadbury.

Vishvas News contacted Mondelez India, the manufacturers of Cadbury through email. As per the email response we received from Consumer Response Cell: “We’ve been made aware of a circulating post on social media, claiming to offer consumers a hamper of free Cadbury products. We can confirm that this has not been generated by us & would urge you to not interact or share personal information through the post. Your security is our priority & we’re working with the relevant organisations to ensure this is resolved.

The website of Mondelez International, formerly known as Cadbury is not the same as mentioned in the viral message. Also, the company is neither celebrating its 70th anniversary in 2020 nor is rolling out any such offer as mentioned in the viral post. If any such event would be happening, the company would have notified its users on its website or social media accounts.

Also, the link in the viral post is prompting users to download an extension. The link is a scam and may harm the device in which it is download.

We found a Facebook post from 2018 where a user asked tagging Cadbury regarding the same message as in the viral post. Cadbury replied to the post: “Thanks for sending this through to us. You’re correct – it’s unfortunately not a Cadbury promotion, and we advise consumers to be careful when engaging with any promotions they think may be suspicious. Thank you for taking the time to make us aware of this one.”

Conclusion: No, this chocolate brand isn’t giving free chocolates in its 70th anniversary. The viral post is fake.