The woman shown in the viral post didn’t undergo 17 surgeries to resemble Barbie doll. The woman is a model and an artist did her makeup for an illustration. 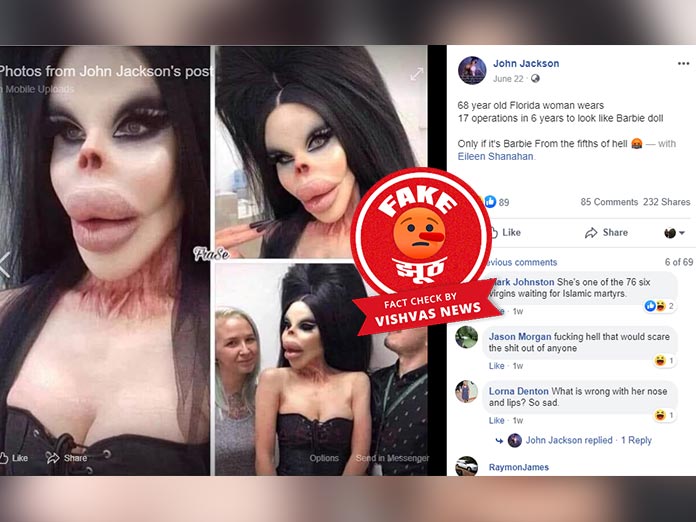 New Delhi (Vishvas News): Some photographs are going viral on social media of a woman with disfigured facial features. The caption with the image states that the woman shown in the picture has undergone 17 surgeries to resemble like Barbie doll. When Vishvas News investigated we found the viral post is fake. Unlike the claims, the pictures do not show a 68-year-old woman after a number of surgeries. In fact, it is a makeup done by a makeup artist named Luis Baptista and the woman is a model from London Cassie Lloyd.

The viral post shared on Facebook reads: “68-year-old Florida woman wears
17 operations in 6 years to look like Barbie doll. Only if it’s Barbie From the fifths of hell.” Some photographs are also shared showing a woman with disfigured facial features. The archived version of the post can be checked here.

Vishvas News performed Google reverse image search of the viral photos and found that the images are viral since May 2019.

We further investigated and found an Instagram post by an artist named Luis Baptista. The artist created the artwork for the character ‘Weirdo Helena’ as an illustration to inform people of the dangers and issues of the beauty industry.  The model in the post is Cassie Lloyd.

Luis Baptista, the makeup artist, also shared an Instagram video showing the making of the character. Here’s the video:

Vishvas News contacted Luis Baptista and asked him about the viral post. He said: “The viral post is doing rounds with a false caption. This is an artwork and he did the makeup of the model shown in the image.”

The post is shared on Facebook by a user named John Jackson. When Vishvas News investigated we found that the user is based out of Australia.

Conclusion: The woman shown in the viral post didn’t undergo 17 surgeries to resemble Barbie doll. The woman is a model and an artist did her makeup for an illustration.