The viral video showing a man collapsing on stairs is not of Sidharth Shukla. It is of a person at a gym in Bengaluru. Sidharth Shukla died in Mumbai on September 2. 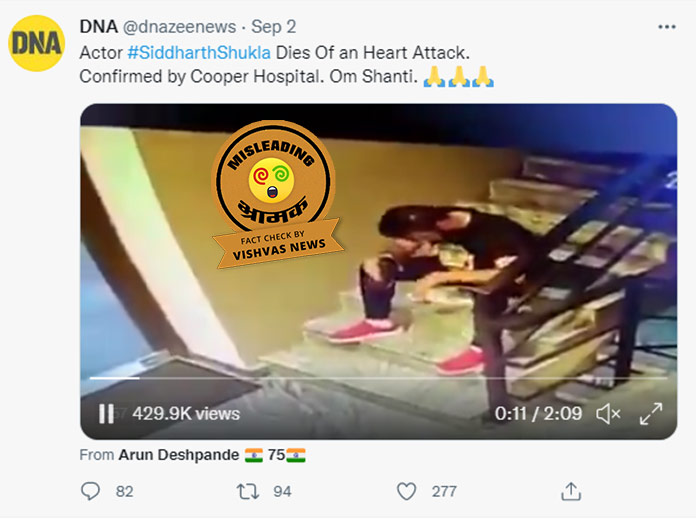 New Delhi (Vishvas News): After the sudden demise of Indian actor and Bigg Boss 13 winner Sidharth Shukla, a video is doing rounds on social media. The video shows a middle-aged man collapsing while sitting on a flight of stairs. The claim alongside the video states that the video is of the moment when Siddharth Shukla suffered a heart attack. Vishvas News investigated and found the viral post to be misleading.

The post shared on Twitter by an account name DNA shows a video of the man collapsing while sitting on a flight of stairs. The claim with the video reads: Actor #SiddharthShukla Dies Of a Heart Attack. Confirmed by Cooper Hospital. Om Shanti.

Vishvas News started investigating the video. On carefully observing the video we found a date stamp on the video: “25/08/2021”. This stated that the video is at least a week old, eight days before Shukla’s death. Whereas, Sidharth Shukla died on September 2nd, 2021.

We used the InVid tool to extract the screengrabs of the viral video. By performing Google Reverse Image Search of the screengrabs, we found a video report published on August 31, 2021. As per the report, the video is from Bengaluru and shows a man collapsing after he suffered a heart attack. Also, it stated that the incident happened at Banashankari Gold Gym.

Vishvas News contacted Gold Gym and spoke to its Central Manager. She said: “This video has nothing to do with Sidharth Shukla. The guy shown in the video had come for a trial class to Gold Gym Bengaluru where he collapsed. We had informed his family.”

Popular television actor Sidharth Shukla, who had won the 13th season of the famous reality TV show Bigg Boss, passed away at the age of 40 on Thursday following a heart attack. He is survived by his mother and two sisters. Sidharth had suffered a massive heart at around 9 am on Thursday after which he was taken to the Cooper Hospital in Mumbai. However, officials said that was brought dead to the hospital.

Conclusion: The viral video showing a man collapsing on stairs is not of Sidharth Shukla. It is of a person at a gym in Bengaluru. Sidharth Shukla died in Mumbai on September 2.