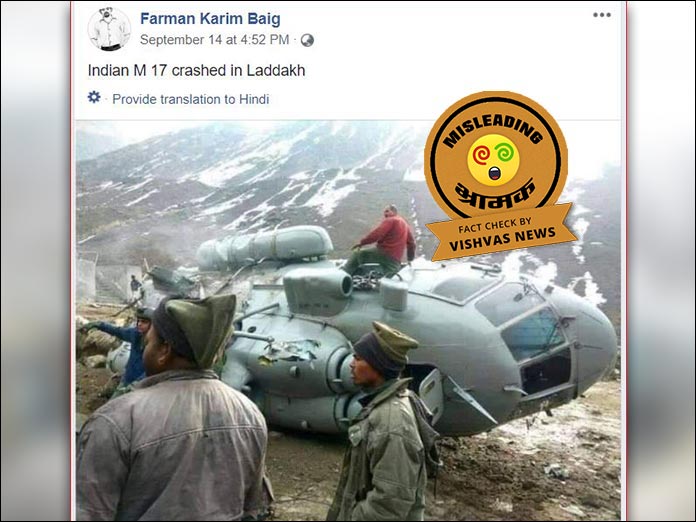 New Delhi (Vishvas News): In the midst of tension on the India-China border, social media is deluged with misinformation around the situation in the borders. A post going viral shows a picture of a helicopter accident with a claim that an Indian M17 helicopter crashed in Ladakh.

Vishvas News investigated and found the viral post to be misleading. The picture of a helicopter crash in Kedarnath in 2018 is now being passed off as an accident in Ladakh.

Vishvas News started its investigation by searching the photo using Google reverse image search. During the search, we found the same picture in many news reports. The picture was shared alongside a description that stated that it a helicopter crashed in Kedarnath in 2018.

On April 3, 2018, a news report published on the Times of India website reported that a cargo chopper of the Indian Air Force crashed near the Kedarnath temple in Uttarakhand. Read the full news here.

We also found a video of Kedarnath crash on ANI’s YouTube channel that was uploaded on April 3, 2018.

Vishvas News further investigated and found news on WION’s YouTube channel. The news reported the same accident of the Indian Air Force cargo helicopter near the Kedarnath temple. The video was uploaded on April 3, 2018.

We contacted officers of the Indian Army for more information. The army spokesperson told us that the viral picture is old. He said that no such incident has taken place in Ladakh these days. The viral picture is that of Kedarnath.

We performed social scanning of the Facebook user Farman Karim Baig who shared the viral post. We found the user is a Pakistani journalist. Farman, who lives in Gilgit, Pakistan, created this account in August 2009.

Conclusion: The picture of a helicopter crash in Kedarnath in 2018 is now going viral with the false claim that it is of Ladakh. The viral post is found to be misleading.