Fact Check: Old video of waterspout captured in Pune shared as clouds pulling water from the Ganges in Allahabad

The viral video, of a waterspout, trending on social media is not from Allahabad but was shot in 2018 at the banks of Nazare Dam near Jejuri in Pune. 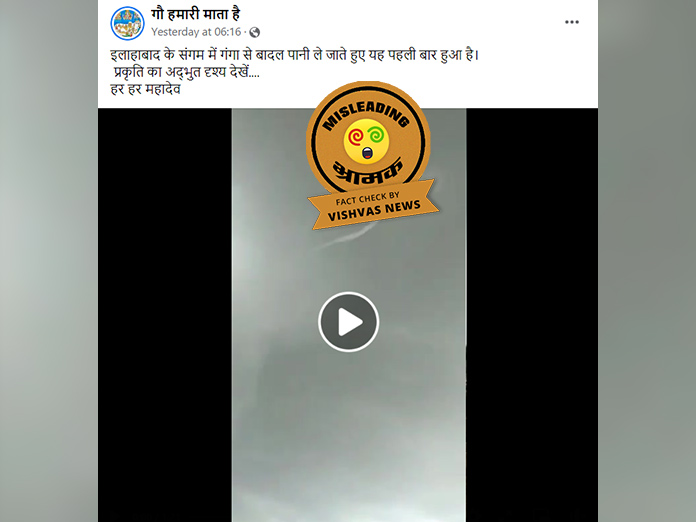 New Delhi (Vishvas News): A Facebook video claiming that a water spout took place at Ganga River in Sangam, Allahabad is going viral on social media. The viral video of the scientific phenomenon was circulated widely on social media on August 1, 2022 .

However, Vishvas News in its investigation found the claim to be misleading. The viral video is from 2018 and was shot at the banks of Nazare Dam near Jejuri in Pune.

Facebook page ‘Gau Hamari Mata Hai’ posted the video of a water spout occurring at Ganga River in Sangam, Allahabad on August 1, 2022. His viral post read, “This has happened for the first time while carrying cloud water from the Ganges at the Sangam of Allahabad. Have a wonderful view of nature….Hail The Shiva!”

Vishvas News explored the fact checking InVID tool and searched the keyframes of the viral video on Google reverse image to know the truth. We found many similar posts on Facebook and Twitter that claimed the viral video to be from Sangam, Allahabad.

However, we also saw many news reports that gave out the true story i.e. the video is from 2018 and was shot near Nazare Dam near Jejuri in Pune. The reports can be found here, here, here and here.

To investigate further, we got in touch with the news reporters from Allahabad and Pune.

Speaking to Vishvas News, Rakesh Pandey, Editor of Jagran Prayagraj clarified, “No such phenomenon has occurred in the region.”

Confirming the details to us, Mangesh Phalle, Reporter from Pune, said, “This viral video is from Pune and was shot in 2018.”

The Facebook page ‘Gau Hamari Mata Hai’ stated in its description that it is a ‘community and religious center’ which is liked by 262,512 people and has 264,952 followers. The page was created on 13th January, 2018.

Conclusion: The viral video, of a waterspout, trending on social media is not from Allahabad but was shot in 2018 at the banks of Nazare Dam near Jejuri in Pune.