Fact Check: Old Photo From Lucknow Passed Off As Noida

Vishvas News investigated the post and found it to be fake. The viral picture in the name of Noida is actually from 2017 from Lucknow. 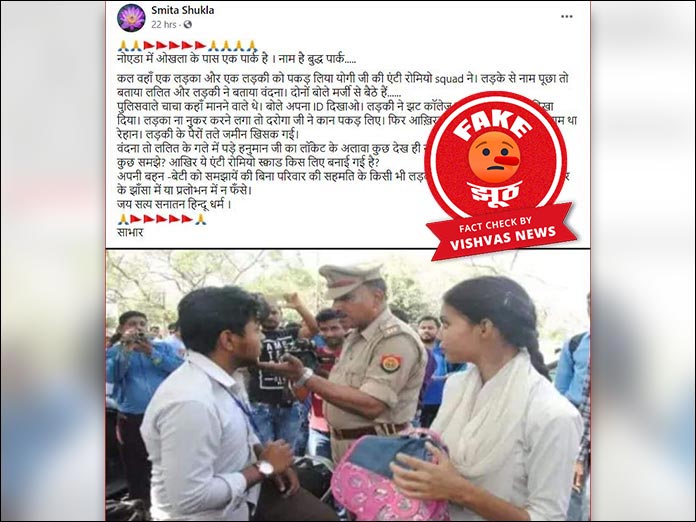 Vishvas News (New Delhi): A picture going viral on social media shows a police officer interrogating a couple. As per the claim, a couple was caught by the police near a park in Noida, Uttar Pradesh.

Vishvas News investigated the post and found it to be fake. The viral picture in the name of Noida is actually from 2017 from Lucknow.

Facebook user Smita Shukla uploaded a picture on March 30 claiming: ‘There is a park near Okhla in Noida. The name is Buddha Park…. There Yogi Ji’s anti-Romeo squad caught them. When asked, the boy told his name Lalit and the girl, Vandana. Police asked them to show their ID. The girl quickly showed the ID of the college. When the boy denied, the police caught his ear. Then finally got the ID out of his wallet. The name in his ID was Rehan. The girl was startled. Vandana did not see anything except Hanuman Ji’s locket in Lalit’s neck. After all, what is this anti-Romeo squad created for? Explain to your sister-daughter that you should not befriend any boy without the consent of the family. Do not get trapped in any kind of temptation. Jai Satya Sanatan Hindu Religion. ‘

Vishvas News investigated the post using the Google reverse image search tool. We found the same picture published in a 2017 article. The report published on June 25, 2017, on a website named scroll.in, mentioned the report card of the UP government. The report stated that on March 22, 2017, the couple was questioned by the Anti Romeo squad of UP Police in Lucknow. Read the full news here.

Vishvas News contacted Dainik Jagran’s crime reporter Gyan Mishra. He spoke to the then Inspector DK Upadhyay seen in the picture. DK Upadhyay is currently the Deputy SP in the Maharajganj district. He told that the viral picture is old. “This is a picture of a checking done near the National College of Hazratganj, Lucknow”, he added.

We also contacted Praveen, crime reporter from Gautam Budh Nagar. He also said that the viral post is fake. According to him, there has been no such checking in Noida.

Conclusion: Vishvas News investigated the post and found it to be fake. The viral picture in the name of Noida is actually from 2017 from Lucknow.