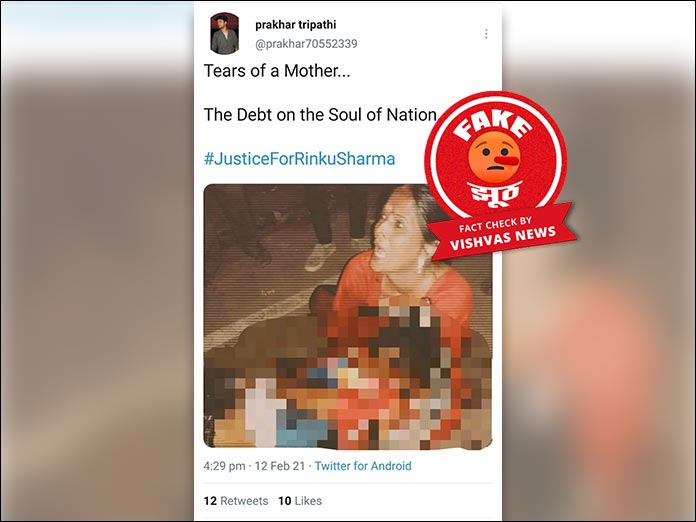 New Delhi (Vishvas News): A picture of a woman holding a wounded boy is being shared on social media. This picture is being linked to the recent murder of a man named Rinku Sharma in Delhi. Social media users are claiming that the woman seen in the picture is the mother of deceased youth Rinku Sharma of Delhi. Vishvas News investigated and found the claim to be fake. The photo is of Anurag Poddar’s mother. Anurag was a young boy who died in a violent clash during Durga Puja in Bihar in October 2020. The image is going viral by falsely linking it to the recent incident in Delhi.

Vishvas News received a claim for fact check on its Fact Checking WhatsApp chatbot (+91 9599299372). The user shared the link of a tweet to verify. A Twitter user named Prakhar Tripathi tweeted the picture with a claim, “Tears of a Mother… The Debt on the Soul of Nation. #JusticeForRinkuSharma.” The archived version of the post can be checked here.

A man named Rinku Sharma killed on February 10, 2021 in Mangolpuri, Delhi. According to the report of Dainik Jagran, the crime branch of Delhi Police is currently investigating this case. After this incident, this case got quite viral on social media and is shared with different claims.

Vishvas News used the Google reverse image search tool to search the viral photo. We found many results related to this picture on the Internet. Google hints ‘Munger Anurag Poddar’ as a possible search related to the photo.

We found the picture in the thumbnail of the video uploaded on YouTube channel named News Jankari on October 28, 2020. The title of the video reads – Anurag’s mother and son in Munger Durga immersion.

The picture is available on the internet long before the Rinku Sharma murder case in Delhi. Vishvas News further investigated and found a report dated October 27, 2020 on the website of Dainik Jagran. The report covers the incident of the violent clash during the immersion of the Durga statue in Munger and the incident of Anurag’s death in firing. In this report as well, the picture of the woman shown in the viral picture can be seen from another angle.

We shared the viral post with Prashant, Munger Bureau Chief of Dainik Jagran. He also confirmed that the picture is of the mother of the young man Anurag, who died in the firing during Durga Puja in Munger. He also connected us with the Mukesh Poddar, who is carrying out – Justice for Anurag. He also said that the woman is Anurag’s mother.He said that the case is in court and is under investigation.

Vishvas News scanned the profile of Twitter user Prakhar Tripathi who shared the viral claim. We found that the user’s profile was created in September 2020. It had 7 followers till the fact check was done.