Fact Check: Old pictures of treasures in Italy getting viral claiming to be from Betul, Madhya Pradesh 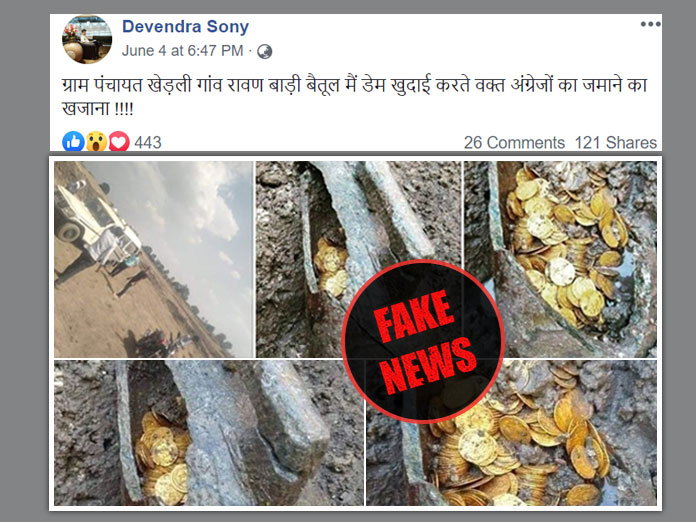 Pictures of gold coins are getting viral on social media with a claim that the coins have been found during the digging of a dam in Betul, Madhya Pradesh. It is further claimed that these gold coins are the treasures from the British era. In our investigation, we found that the claim is false. The gold coins shown in the image are not the treasures from the British era. In fact, the picture is that of gold coins found during the archeological dig in Italy.

Facebook User Devendra Sony uploaded five photos of gold coins found during a dig. The photos were uploaded on Facebook by the user on June 4 with a claim that reads in Hindi: ग्राम पंचायत खेड़ली गांव रावण बाड़ी बैतूल में डैम खुदाई करते वक्त अंग्रेजों के जमाने का खजाना !!!! As per the claim, the gold coins shown in the image are found during a dig in Betul, Madhya Pradesh.

Team Vishvas observed viral pictures carefully. A total of five photos were uploaded by the user. Four pictures were that of gold coins and in one picture some local people could be seen. We performed Google Reverse Image Search to check the viral pictures of gold coins.

We got a link at Indian Express website where the photos were available. The article in which the photos were used was published on September 11, 2018. The article’s headline was: Amphora filled with hundreds of Roman gold coins found during archaeological dig in Italy.

In the article, it was stated that an amphora filled with gold was discovered at the Italian province of Como during an archeological dig in Italy.

Using Twitter Advanced Search in InVid tool, we tried finding out whether the image was available on Twitter.

On the Twitter handle of the Ministry of Cultural Heritage and Activities, Italy, @_MiBAC, we found the viral photo that was tweeted on September 7, 2018.

The tweet was made in the Italian language which we translated in English using google translator. The tweet read: Hundreds of gold coins from the late imperial era have been found in the center of #Como, in a soapstone container of unusual shape. “A discovery that fills me with pride,” said the minister @BonisoliAlberto.

As per DSP Motilal Kushwaha, after the image of gold coins with the claim went viral on social media, the police went to Kherli village and enquired about the same from the villagers. Actually, the work of deepening the pond was going on at that place, no gold was found as claimed.

In the investigation, Vishvas News team found that the viral photo is not from Betul. The photo of the treasury was that from September 2018 of Como, Italy. The photo of people standing is that from Betul, but it not related to the gold-related photos.