Fact-check: No, China was not punished in the form of floods, old video of Japan’s Tsunami viral with false claims 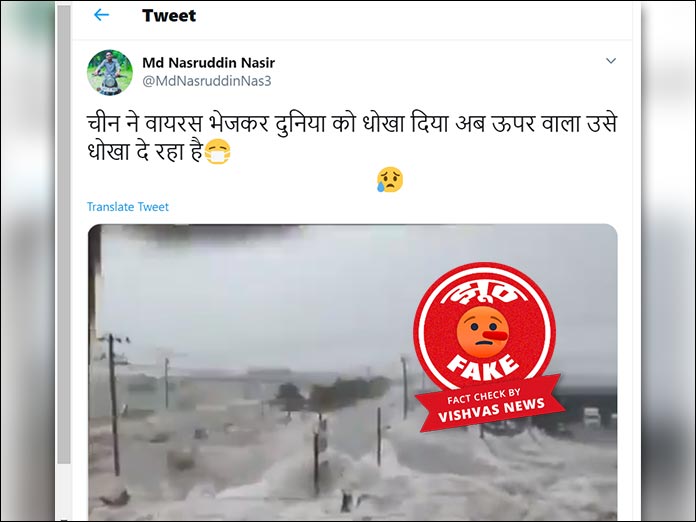 New Delhi (Vishvas Team): A video is being widely shared on social media where one can see vehicles are flowing in the flood waters. It is being claimed that China is being punished for spreading coronavirus in the world. This video was received on the Fact-Checking WhatsApp bot (+91 9599299372) for fact-checking as well. Vishvas News in its fact-check found the claims to be false. An old video of Japan’s Tsunami has been linked to the coronavirus pandemic and is being shared with false claims.

On various platforms of social networking website a video is being shared claiming it to be from China and relating it with coronavirus. Md Nasruddin Nasir, a Twitter user shared it with similar claims. User tweeted the video claiming that, “China deceived the world with the coronavirus pandemic and now is being punished by the God.”

Vishvas News first used the InVID tool to check the video. We considered the key frames from the same. Later, we used the Google Reverse Image Search on the key frames that we received on the InVID. In the search result, it was suggested that the images appeared from the Japan’s Tsunami disaster from the year 2011. We found numerous such old videos. Vishvas News found the very video being circulated with false claims on the YouTube channel takuro suzuki. This video was uploaded on 18 December 2011. Which obviously proves that it has no relation with the current situation in China. You can view the video as below.

The description of the video tells that the this is the Tsunami that was followed by an earthquake in the northern Japan. This video was taken from the roof of Ishinomaki Gas Company, which is a Japanese Gas Company. Another address in the video seen is, 2-3-48, Myojincho, Ishinomaki-shi, Miyagi. The screenshot of the description is as follows:

This was hence proved that the video belongs to the Japan’s deadly Tsunami of the year 2011. The video has been recorded from the roof of Ishinomaki Gas Agency.

We scanned the profile of the Twitter user who shared this video, Md Nasruddin Nasir. This profile was created in August 2020. Until the fact-check 83 people were following the user.

Conclusion: The video being widely shared on the social networking platform is not from China. This belongs to 2011 Japan’s Tsunami disaster. Viral claim is fake.