Fact-Check: Old video from Bangladesh goes viral claiming to be from West Bengal

Vishvas News in its investigation found out that the video claimed to be from Kolkata is old and is that of a protest rally in Bangladesh against the genocide of Rohingya Muslims. 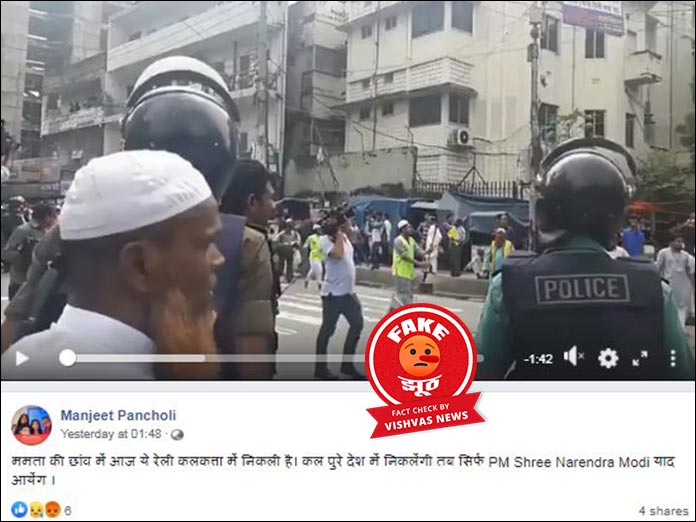 Vishvas News (New Delhi): A video is being shared over social media platforms especially WhatsApp and Facebook, where Muslims are seen taking out a huge rally. It is being claimed along with the video that the rally was taken out by Muslims in Kolkata with the support of chief minister Mamta Banerjee. Vishvas News in its investigation found out that the video is over four years old from Bangladesh taken out against brutalities on Rohingya Muslims.

Investigation:
Vishvas News started its investigation by observing the video closely first.
We played the video over and over again and made several observations.

The lifesize cutout that appears like that of Mamta Banerjee, is actually that of the Myanmar’s now detained leader, Aung San Suu Kyi.
One can see that on zooming in the video.

Another observation that Vishvas News made was that of the perfectly visible flag of Bangladesh in the video.

We also found a report published on www.outlookindia.com on 8 September, 2017. The report was titled: Thousands of Bangladesh Muslims protest Rohingya killings
Read the report here.

Vishvas News then interacted West Bengal bureau chief of Dainik Jagran, JK Vajpayee, he too told us that the video is not from Kolkata and has been going viral with false claims since a couple of years.
Vishvas News too had earlier fact checked this same video with similar claim.

Vishvas News now conducted the background check on the Facebook user that shared the viral video. We came to know that user Manjeet Pancholi is a resident of Liverpool.

Conclusion: Vishvas News in its investigation found out that the video claimed to be from Kolkata is old and is that of a protest rally in Bangladesh against the genocide of Rohingya Muslims.