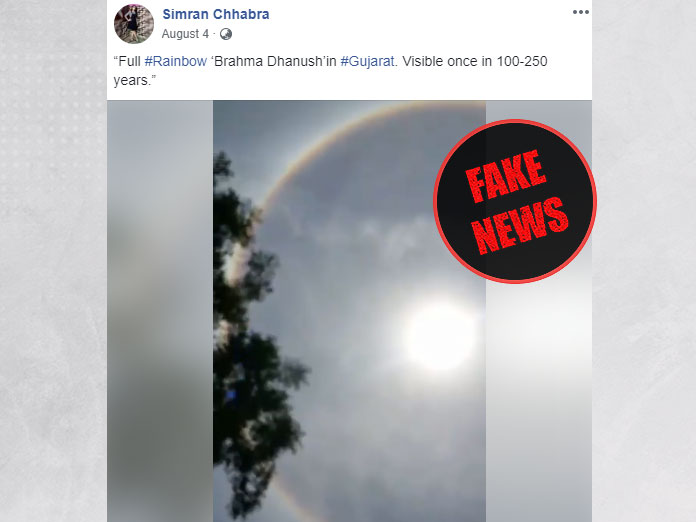 A video is getting viral on social media in which a circle is visible around the sun. In the viral video, it has been claimed that this is a full rainbow visible once in 100-250 years. The post further claims that the video was captured in Gujarat. Vishvas News investigated and found that it is not a rainbow that is seen in the video, it is a 22-degree halo.

The viral video shared on social media claims that a full rainbow is visible in Gujarat and this happens once in 100-250 years. The video is also viral on Twitter with different narratives.

Vishvas News started its investigation by searching online with appropriate keywords. We found that the video is viral across social media.

We also found that this is not the first time the video is getting viral. It was shared on social media in the year 2017 as well. However, in 2017 it was claimed that it is from Pune Maharashtra. The user named Arvind Shenoy posted the same video on Twitter claiming it to be from Pune, Maharastra.

Vishvas News spoke to Mahesh Palawat – Vice President – Meteorology and Climate Change, Skymet Weather regarding the video. As per him, “it is not the rainbow that can be seen in the video, it is a halo phenomenon. A 22-degree halo is phenomenon that belongs to the family of ice crystal halos, in the form of a ring with a radius of approximately 22° around the Sun or Moon. It forms as the sun- or moonlight is refracted in millions of hexagonal ice crystals suspended in the atmosphere.”

We searched about the 22-degree Halo phenomenon and found a report by the University of Illinois’ on Weather World Project 2010. As per the report, there is a phenomenon called sun halo in which a ring caused by sunlight similar to the ring shown in the viral video. “A halo is a ring of light surrounding the sun or moon. Most halos appear as bright white rings but in some instances, the dispersion of light as it passes through ice crystals found in upper-level cirrus clouds can cause a halo to have color.”

The report says, “Halos form when light from the sun or moon is refracted by ice crystals associated with thin, high-level clouds (like cirrostratus clouds). A 22-degree halo is a ring of light 22 degrees from the sun (or moon) and is the most common type of halo observed and is formed by hexagonal ice crystals with diameters less than 20.5 micrometers.”

We further searched the information about the full rainbow. On the official website of MET Office, we found that: “the key factor that determines how much of a rainbow we see is our visual reference point. In most cases, we only see less than half of a circle – the characteristic rainbow arc we are all familiar with. However, if you are lucky enough to be in the right position at the right time, you can see a full circle rainbow in all its splendour. A rainbow’s centre is directly opposite the position of the sun in the sky, so more of a rainbow can be seen as the sun approaches the horizon. Therefore you will normally see the greatest percentage of a rainbow (50%) at sunrise or sunset.

We also found a video that shows a full rainbow. It can be seen here:

It is not the rainbow that can be seen in the viral video. The claim in the video is false. It is actually a halo effect.