Vishvas News investigated and found the viral claim to be false. An old video of a Maulvi from Saharanpur, UP is being shared with a false claim. 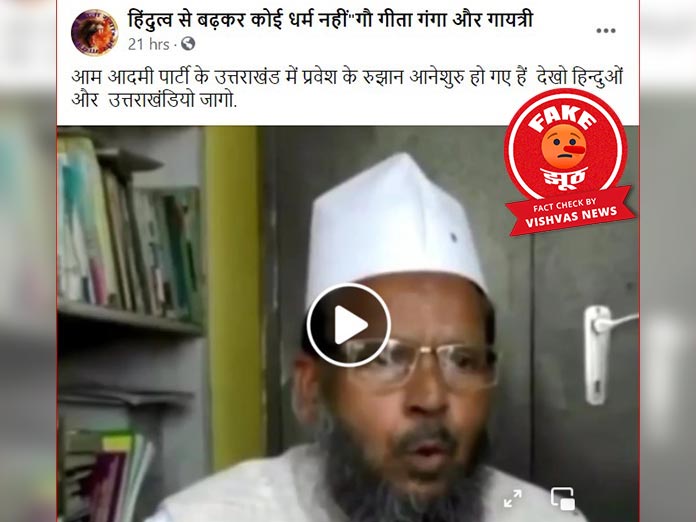 Vishvas News (New Delhi): A video is going viral on social media. In this video, a man can be seen describing Badrinath in Uttarakhand as a religious place for Muslims. Social media users are sharing the viral video with a communal angle by linking it to Aam Aadmi Party, Uttarakhand. Vishvas News investigated and found the viral claim to be false. An old video of a Maulvi from Saharanpur, UP is being shared with a false claim.

View the archived version of this post by clicking here.

Vishvas News watched the one-minute video carefully. At the very beginning of this video, the person is seen claiming that it isn’t not Badrinath, it is Badruddin Shah. The person is further saying that this is a religious place of Muslims. Vishvas News searched it on YouTube on the basis of keywords related to this video (Badrinath, Badruddin Shah…). We found a video uploaded on November 16, 2017 on the verified channel of News18 India. The viral video can be seen in this report after 2 minutes 10 seconds. In the description of this 4-year old video, the person seen in the viral video has been described as Maulana Abdul Latif. This video report can be viewed by clicking here.

Based on the clues from this video report, we searched the viral claim further on the internet. We found a report published on November 18, 2017, on the website of Dainik Jagran. In this report, while reporting this viral claim related to Maulana Abdul Latif, it has been stated that Maulana has apologized for his statement. This report can be read in detail by clicking here.

The investigation by Vishvas News so far had proved that the viral video and the claim related to it is from 2017. The person seen in the video is Maulana Abdul Latif of Saharanpur. Vishvas News contacted Devendra Sati of Uttarakhand State Bureau of Dainik Jagran in this regard and shared the viral claim with him. He quoted Aam Aadmi Party’s Uttarakhand media in-charge, Amit Rawat, as saying, ‘The person who told Badrinath Dham as Badruddin Shah’s place is not an Aam Aadmi Party worker. If someone is spreading such news then it is wrong.”

Vishvas News scanned the profile of Facebook user Neetu Indresh Uniyal, who shared the viral claim. The user is a resident of Chandigarh.

Conclusion: Vishvas News investigated and found the viral claim to be false. An old video of a Maulvi from Saharanpur, UP is being shared with a false claim.