Vishvas News investigated and found the post to be fake. The video is old and is falsely viral in the name of Gujarat. The video is present on the internet since many years. 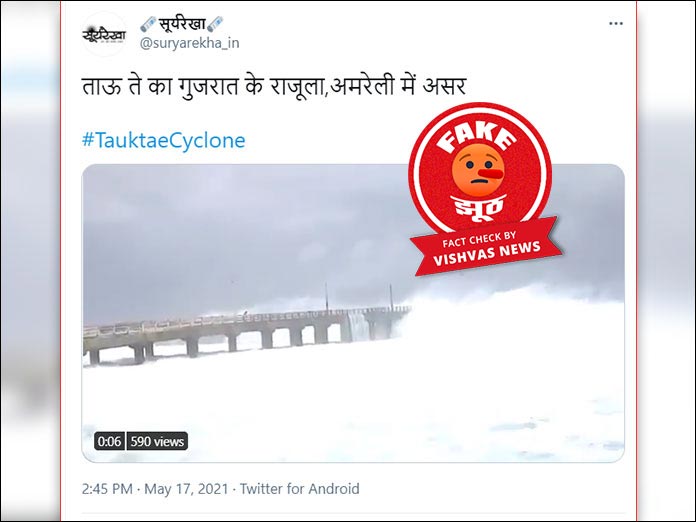 Vishvas News (New Delhi): A video is going viral in the name of Amreli, Gujarat. It is being claimed that the bridge Rajula seen in the video is of Amreli. In the video, giant waves of water can be seen above the bridge. Vishvas News investigated and found the post to be fake. The viral video is present on the internet since many years.

Twitter handle Suryarekha (@ suryarekha.in) uploaded a video on May 17, describing it as of Gujarat. The user wrote: ‘Tauktae’s effect in Rajula, Gujarat, Amreli.’

Vishvas News used the InVID tool to extract the screengrabs of the video. We used Google reverse image search on the screengrabs and found the video viral in the name of Mumbai. This video uploaded on a YouTube channel on December 5, 2017, was described as from Bandra. The video can be seen by clicking here.

Similarly, we also got this video by the name of Rameshwaram. It was uploaded by a YouTube channel on November 16, 2018. The video can be seen here.

Vishvas News contacted Prashant Nema, a senior journalist from Gujarat, and shared the video with him. He told us that this video has been viral in the name of different places earlier as well. This video has no relation with the Tauktae storm or Amreli.

During the investigation, we found a piece of news on Jagran.com. The news posted on May 19 reported that the relief and rescue operations started in Saurashtra, South Gujarat, including in the affected districts of Bhavnagar, Gir Somnath, Amreli, and Junagadh after the cyclone had hit the places. Read the full news here.

Conclusion: Vishvas News investigated and found the post to be fake. The video is old and is falsely viral in the name of Gujarat. The video is present on the internet since many years.