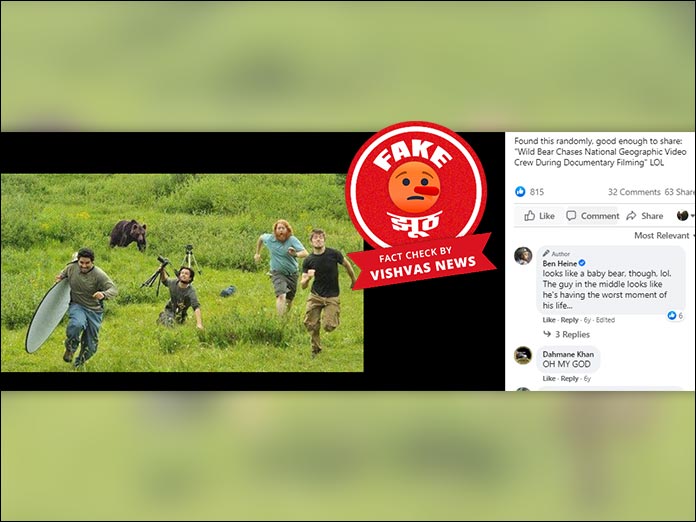 New Delhi (Vishvas News): A photo going viral on social media shows a wild bear chasing some people. The claim alongside the post states that a wild bear is chasing the National Geographic crew during the filming of a documentary video. Vishvas News investigated and found the post to be fake. The photo isn’t real and is created using photo editing tools.

Vishvas News received a post on its Whatsapp chatbot to fact check. In the post, a bear could be seen chasing a group of people. The caption along with the post reads: “Wild Bear Chases National Geographic Video Crew During Documentary Filming.”

Vishvas News investigated using the Google Reverse Image Search tool. We found that the original picture had been taken on a film location scout in Colorado and was edited with a stock photograph of a bear. Here is the stock photo of the bear that is used in the edited image. The mirror-imaged picture was used in the viral post.

The original image of the group of people can be seen in a report published on GIZMODO.

The same photo was shared in a story on The Guardian with the title: “Five fake photos that went viral in 2015”. As per the report, the photo was actually taken on a film location scout in Colorado four years ago and photoshopped with a stock shot of a bear then shared on Facebook to spook their friends.

The photo is shared on Facebook by a page named Ben Heine. We scanned the page and found that the page has 302,806 followers.