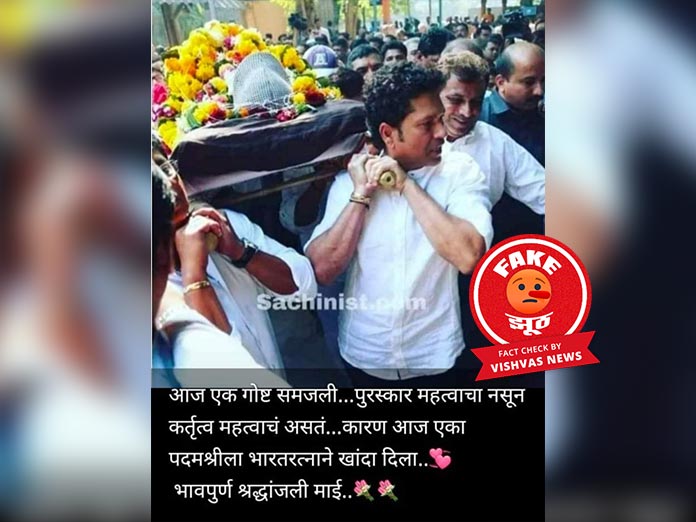 New Delhi (Vishvas News): A picture is being widely shared on various social media platforms, which claims that a Padma Shri was given shoulder by a Bharat Ratna. Pointing that it was Sachin Tendulkar who was present during the last rites of Sindhutai Sapkal. Vishvas News in its investigation found that he was not a part of the last rites that took place in Pune.

Translation: A real Bharat Ratna, we are proud of you.

Translation: It is not the award but the work that is important. Today a Padma Shri was given shoulder by a Bharat Ratna. Rest in peace Mai.

We found the exact same image on an article of Indian Express.
The title of the article was, ‘Tearful Sachin Tendulkar attends coach Ramakant Achrekar’s funeral‘ and it was dated January 3, 2019.

This cleared that the picture was from the funeral of Ramakant Achrekar.

The caption of the image said, ‘Sachin Tendulkar at coach Ramakant Achrekar’s cremation.’

Sindutai Sapkal, a social worker and known as the mother of orphans passed away on 4th January, 2022 and her last rites were performed the next day in Pune.

We checked for pictures from the funeral of Sapkal and we could not find the picture of Sachin Tendulkar anywhere.

Neither did we find the reports of Tendulkar attending the last rites of Padma Shri awardee Sindhutai Sapakal.

In the next step of investigation, Vishvas News contacted ANI correspondent of Pune, Alim Shaikh. He told us that Sachin Tendulkar was not a part of funeral of Sindhutai Sapkal.

In the last step of investigation, we did a social background check on the user who shared the viral post. Narayan Borude is a resident of Mumbai and has over 1100 friends on Facebook.