Fact Check: Post claiming to show a new species of coral found in the Galapagos Islands is fake 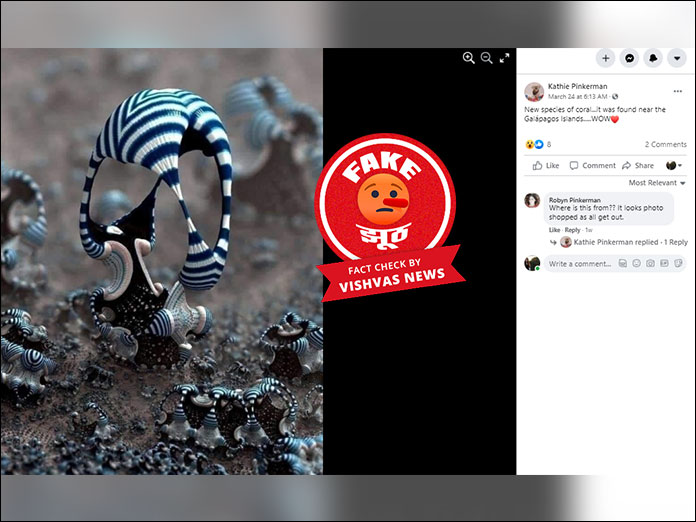 New Delhi (Vishvas News): A post shared on Facebook shows a photo with a claim that states a new species of coral was recently discovered off the coast of the Galápagos Islands. The image shared in the post is of the purported bright blue-and-white striped coral, as per the claim.

Vishvas News investigated and found the post to be fake. The post claiming to show a new species of coral found in the Galapagos Islands is false. It is actually a 3d fractal digital work created by an artist.

The post shared on Facebook features an image of the purported bright blue-and-white striped coral. The claim alongside the post reads: “New species of coral…it was found near the Galápagos Islands…..WOW.”

The user’s bio suggested that he is an Iterative Fractalist.

According to the website, “Deviant Art was founded in August 2000. DeviantArt is the largest online social network for artists and art enthusiasts, and a platform for emerging and established artists to exhibit, promote, and share their works with an enthusiastic, art-centric community.”

In the comment section on the website, ‘batjorge’ replied that he never claimed it as other than a 3d fractal digital work, done with Mandelbulb 3D software.

Mandelbulb 3D is a free software application created for 3D fractal imaging. Developed by Jesse and a group of Fractal Forums contributors, based on Daniel White and Paul Nylander’s Mandelbulb work, MB3D formulates dozens of nonlinear equations into an amazing range of fractal objects, according to Mandel Bulb website.

Vishvas News contacted the user ‘batjorge’ over mail and he replied: “I know for some time that my image has gone viral over the internet, specially on FB pages, and have been shared hundreds of thousands of times without exaggeration.”

He added: “My name is Jorge Abalo, aka Batjorge, and I am the artist of this work and it is NOT a photo. It is a 3d fractal render done with mathematical algorithms named “formulas”. 3D fractals are relatively recently discovered around 2009 and have been represented with different programs, like Mandelbulb3D in this case. Fractals, specially the 3D ones can resemble in many ways known forms, like patterns that the nature produce itself, so this is a approach to what nature have been doing since the very beginning! I never claimed it to be an object of nature, merely being a 3d render as said before.”

The photo was shared on Facebook by a user named Kathie Pinkerman. When we scanned the profile of the user we found that the user is based out of Ohio.

Conclusion: Vishvas News investigated and found the post to be fake. The post claiming to show a new species of coral found in the Galapagos Islands is false. It is actually a 3d fractal digital work.