Fact Check: Post that says Assam may witness a 7-8 magnitude earthquake is misleading 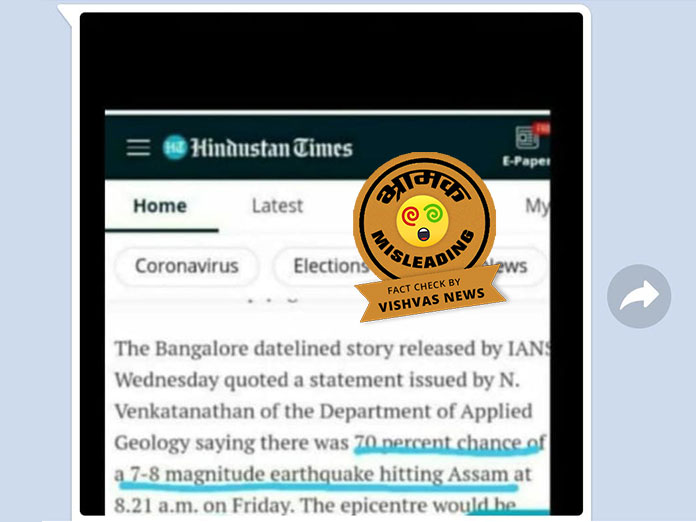 Vishvas News (New Delhi): Amidst the 19 continuous earthquakes in two days (10 in a single day) in Assam, a screenshot of a Hindustan Times web story is being circulated on social media with the fake claim, which says that Assam may witness a 7-8 magnitude earthquake on Friday. Since tomorrow is Friday, this has created panic amongst the people. In our investigation, we found that this is a 15-year-old news clip that is getting viral now.

A screenshot of old news of Hindustan Times getting circulated on various WhatsApp groups in Assam. In the news clip, it’s clearly mentioned that Assam may witness a 7-8 magnitude earthquake on Friday. Since tomorrow is Friday and Assam has already witnessed 19 continuous jolts, including a 6.4 magnitude in the last two days, the people of Assam are getting panicked.

Vishvas News first started searching the screenshot with keywords. We couldn’t find any related posts on the Internet in recent times. However, we found the exact same on Hindustan Times’s website which was filed on Sept 7, 2006. The viral picture is a mobile screenshot from the same news. The news was written by Syed Zarir Hussain for IANS.

The report can be read here.

When we search about the author, we found that he is currently working as Managing Editor of a leading English News Channel based in Guwahati.
Vishvas News contacted Sr Journalist Syed Zarir Hussain for confirmation on this news. He confirmed to us that the news is 15 years old now, and this is not relevant to Assam’s current situation.

Conclusion: Old picture of Hindustan Times Report is going viral with the fake claim. Vishvas News, in its investigation, found that the Hindustan Times web story which says that Assam may witness a 7-8 magnitude Earthquake on Friday, is 15 years old and is not relevant to current Assam situation.