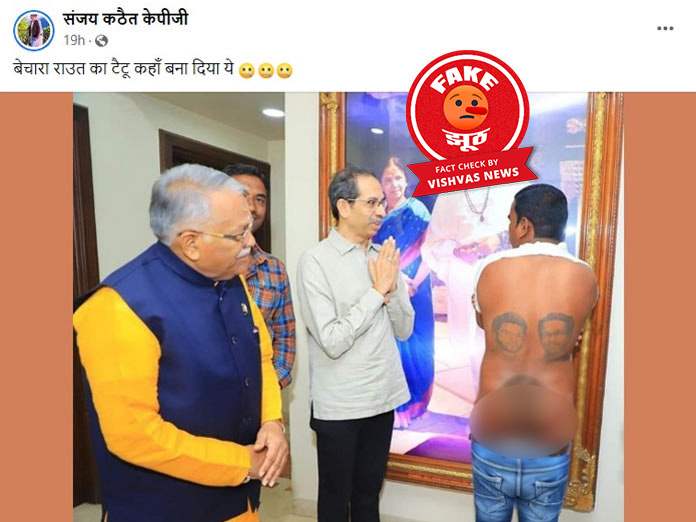 The viral claim turned out to be false in the investigation of Vishvas News. The viral picture is edited. The person has not got Sanjay Raut’s tattoo made.

Facebook user Sanjay Kathait KPG shared this picture and wrote in the caption, “Where did you make tattoo of poor Raut?”

We searched the picture through Google reverse image. During this, we found the original picture on a Twitter account Kalyani Ganesh Wagh. It was shared on 29 August 2022.

Taking the investigation further, we started searching with related keywords. We found a report related to the viral claim uploaded on the official YouTube channel of TV9 Marathi. It was uploaded on 28 August 2022. According to the report, Ramanna Jamadar, a Shiv Sainik from Solapur, has got the tattoos of Uddhav Thackeray and Aaditya Thackeray on his back.

We contacted Shiv Sena spokesperson Mangat Ram Munde for more confirmation. We shared the viral picture with him. He told us that the viral claim is false. This photo is edited.

At the end of the investigation, Vishvas News did a social scanning of the fake post user Sanjay Kathait KPG. We came to know that the user has 3,235 friends. User has been active on Facebook since April 2011.