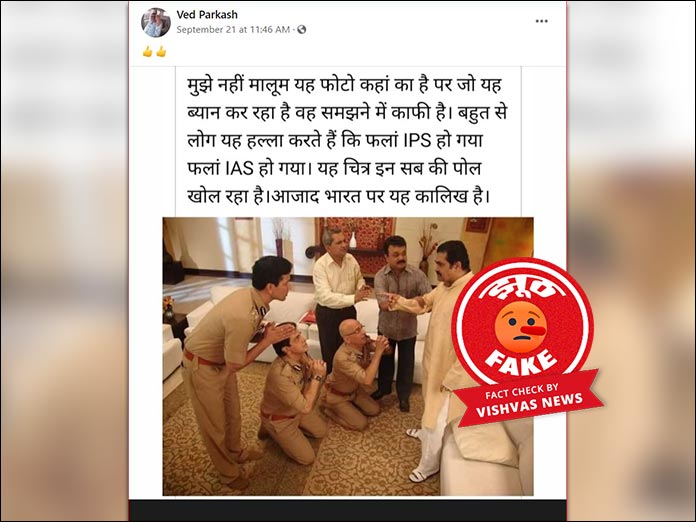 New Delhi (Vishvas News). A viral picture shows three men in police uniform leaning in front of a man with folded hands. It is shared with claims that the picture is exposing the reality of IPS and IAS officers in India.

Vishvas News investigation revealed the claim is fake. We came to know that the scene of a film released in 2011 is now viral with fake claim.

Facebook user Ved Prakash shared a picture where in three men in police uniform can be seen kneeling in front of a person with folded. The post reads, “I don’t know from where does this photo belong but it is enough to understand to see the reality IPS and IAS officers in India. This picture is revealing everything…”

The archived version of the viral post can be seen here,

We first uploaded the picture to search on the Internet using Google reverse image search. We found this picture on www.koimoi.com in a review article of the film ‘Kya Yeh Sach Sach Hai’ published on 30 December 2011. We could confirm that viral picture is actually a scene from the film produced by YP Singh.

We searched on the Internet for more details of the film. Imdb website clarified that the film ‘Kya Yehi Sachhi Hai’ was written and directed by YP Singh in 2011.

We contacted YP Singh for verification. He told us that the viral picture is a scene from his film ‘Kya Yehi Sachhi Hai’. He sent us a YouTube link of his entire film. At 1:48 hours of the video, we found the scene that is viral now.

Social scanning of user who shared this viral post revealed that he hails from Chandigarh and is currently an Udaipur resident.

Conclusion: A scene from a film is viral with fake claims.