Fact Check: Tamil Nadu has not yet imposed restrictions on inter-district movements, viral claim is fake 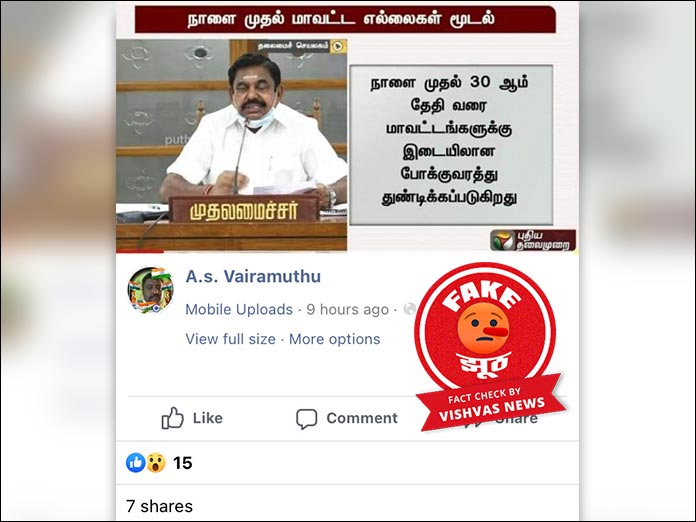 With spike in coronavirus cases in Tamil Nadu, a news card of puthiyathaliamurai channel quoted TN Chief Minister imposing ban on inter-district transportation is viral on social media. While it doesn’t show clarity on duration, it simply states as from tomorrow till 30th.

Weeks after Tamil Nadu imposed restrictions on travellers from Kerala amid Covid-19 spike, we found this news card viral on social media.

We didn’t not find authentic news reports confirming any such announcements recently. But we found this news on Puthiyathalaimurai You Tube channel uploaded on 24 June 2020.

Vishvas News contacted the office of State Health Secretary J Radhakrishnan for clarification. “The viral post is fake. The state has not made any such announcement now,” said an official to us on call.

Social scanning of the user who shared the viral post revealed that he is from Sivakasi, Tamil Nadu and has 4,999 friends on Facebook.