Fact-check: The video clip going viral in the name of Savarkar is not original

Vishvas News in its investigation found out that, the video going viral stating that the video is a rare video of Vinayak Damodar Savarkar is actually a documentary by the Government of India. 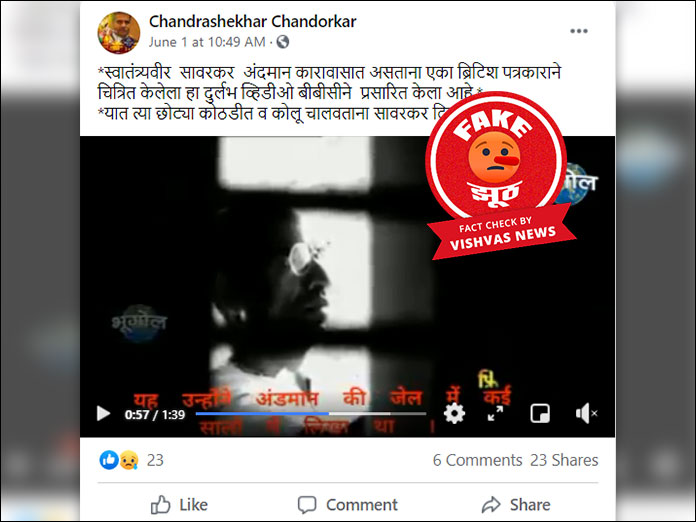 Vishvas News (New Delhi): Vishvas News came across a video being widely shared with the claim that the video is an original video of Swatantryaveer Savarkar shot by a British journalist when he was in Andaman jail. It further claims that the rare video is now broadcast by BBC.
Vishvas News in its investigation found the claim to be false.

Translation: This rare video of Swatantryaveer Savarkar was shot by a British journalist when Savarkar was in Andaman jail. This video is now broadcase by BBC. In this video Savarkar can be seen working on ‘Kolu’ (a machine to extract oil) in a cellular jail.

Investigation:
Vishvas News at first observed the video clip. We could see that it had the logo of, ‘Bhugol’ and not BBC. We could not find this video on the social networking websites of BBC as well.

Upon doing a keyword search and a general google reverse image search over the keyframes, Vishvas News found the video uploaded over the YouTube channel of Ministry of Information & Broadcasting.
A 40 min 58 sec video uploaded over this platform, depicted the, ‘Life of Shri Vinayak Damodar Savarkar‘. The video was uploaded on 14 August, 2014.

The part of the viral clip can be seen from 25 mins in this YouTube video.

According to the Films Division of Ministry of Information and Broadcasting, we found out that the film was directed by Prem Vaidya and produced by Films Division. This was made in the year 1983.

For more details on this video, Vishvas News interacted with Akshay Jog, a researcher on Veer Savarkar and an author who also has the book, ‘SWANTRAVEER SAVARKAR : AKSHEP ANI VASTAV’ to his credit. He told Vishvas News, “The viral video is a part of the government documentry on Savarkar made by Prem Vaidya when Indira Gandhi was the Prime Minister of India”.

Vishvas News now did a social background check of the Facebook user who shared the viral video. We found out that Chandrashekhar Chandorkar is a resident of Nashik.

Conclusion: Vishvas News in its investigation found out that, the video going viral stating that the video is a rare video of Vinayak Damodar Savarkar is actually a documentary by the Government of India.