Fact Check: The woman in the video is not an artificial human, she is an animated character in a video game

Vishvas News in its investigation found that this claim is false. The woman in the video is not a robot, but a video game character. 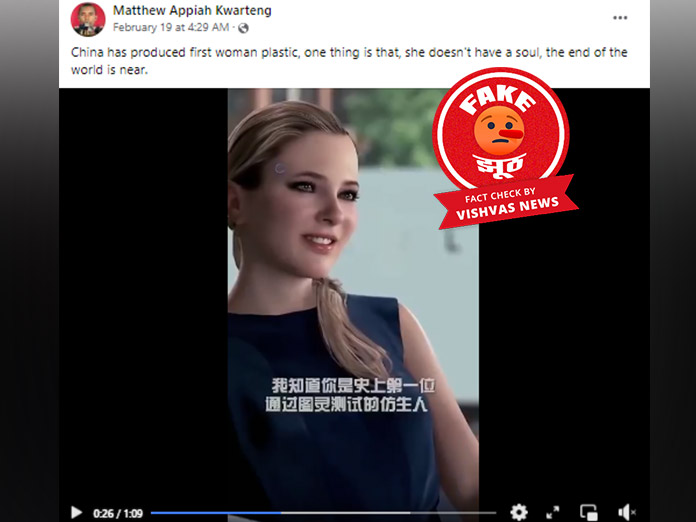 New Delhi (Vishvas News). A video is going viral these days on many social media platforms. In this viral video, a woman can be seen talking. It is being claimed with the post that this is an artificial woman made in China. Vishvas News found in its investigation that this claim is false. The woman in the video is not an artificial woman, but a video game character.

The viral post is claiming “China has produced first plastic woman, one thing is that she doesn’t have a soul, the end of the world is near.”

To check this video, we put this video in the InVid tool and extracted its keyframes. Then searched these keyframes on Google reverse image. We found the same video on PlayStation’s Verified YouTube channel on May 23, 2018. The description accompanying the video read “Detroit: Become Human – Shorts: Chloe | PS4.”

Searching with keywords, we found that Detroit: Being Human is a video game developed by Quantic Dream and published by Sony Interactive Entertainment in 2018. Chloe is a character in this game.

A search revealed that Chloe Detroit is an ST200 Android: Being Human, appearing as a hostess on the game’s main menu. She initially helps the player in customizing their settings and experience. She later stays on the main menu, occasionally asking questions or commenting on choices and events in the game.

We reached out to cyber expert and gaming enthusiast Ayush Bhardwaj regarding this. He also confirmed that “Chloe is a hostess of the being human game. She is an animated character.

This post was shared by a user named Matthew Appiah Kwarteng. The user has 2.8K friends on Facebook and is from Germany.

Conclusion: Vishvas News in its investigation found that this claim is false. The woman in the video is not a robot, but a video game character.