Fact Check: These are not real birds, this is miniature artwork 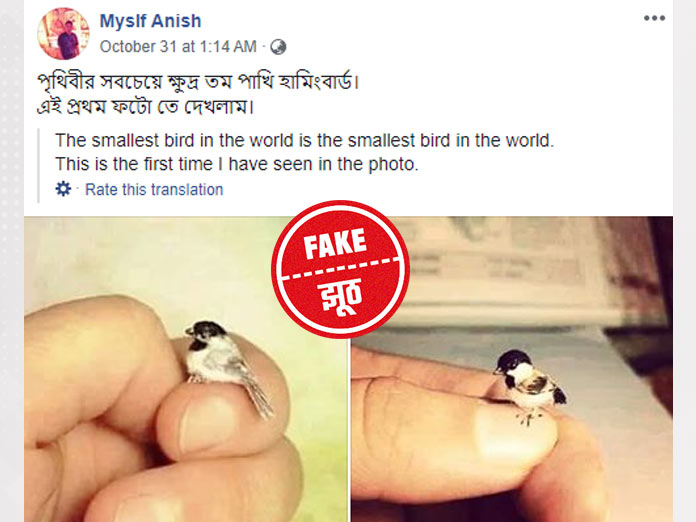 New Delhi (Team Vishvas News). A post is going viral on social media with 2 pictures. In the first picture, a bird about half an inch big is sitting on the thumb nail of a person and in the second picture, almost the same sized bird is sitting on the finger of a person. The post claims that this is the smallest bird in the world. We found in our investigation that this claim is false. The bird seen in the viral picture is not an actual bird, but an artwork.

Two photos can be seen in the viral post. In the first photo, a bird about a half inch long is sitting on the thumbnail of a person. In the second picture too, almost same sized bird is sitting on a person’s finger. The description with the post reads in Bengali, “পৃথিবীর সবচেয়ে ক্ষুদ্র তম পাখি হামিংবার্ড. এই প্রথম ফটো তে দেখলাম.”Which translates to ” This hummingbird is the smallest bird in the world. This is the first time I’ve seen such a small bird. “

To investigate this post, we first took a screenshot of this picture and searched it on Google reverse image. After searching a little, we found a Facebook page called Malinik Miniature. The page had both the pictures uploaded in its photos section. On the page’s about us section, we came to know that this page is run by a miniature artist named Ina, living in America.

Ina, the admin of this page, has written about herself and her work, “My name is Ina – or Malinik Miniatures. I am from Berkovitsa (Bulgaria, Europe) and currently live in Illinois (USA). I specialize in animals and mostly birds – everything is personally handmade. I work with polymer clay and wire to make the sculpture and then cover it with feathers or fibers. I always try to make my creatures as realistic as possible and enjoy doing so 🙂 “

For more confirmation, we wrote to Ina. She responded by saying that the birds present in the viral photo are indeed artistic creations and not real birds.

To throw some more light on the matter, we spoke to Priya Davidar, a professor at Pondicherry University and a noted bird expert and conservation biologist. She said, “Such miniature birds do not exist. The smallest bird in the world is the bee hummingbird of Cuba which measures around 57 mm. The bird in this photo is much smaller. Physiologically it would not work to have such small warm blooded animals. Their energy expenditure would be very high because of the surface area/volume ratio. ”

When we searched on the internet, it was confirmed that according to the Guinness Book of World Records, the hummingbird of Cuba is the smallest bird in the world and the length of this bird is about 2.24 inches.

Many people are sharing this post on social media. One of these is a Facebook profile named Myslf Anish.

Conclusion: In our investigation, we found that the bird seen in the viral picture is not the smallest bird in the world, but a miniature artwork made by an artist. The world’s smallest bird is Cuba’s hummingbird that is at least 2.4 inches long.