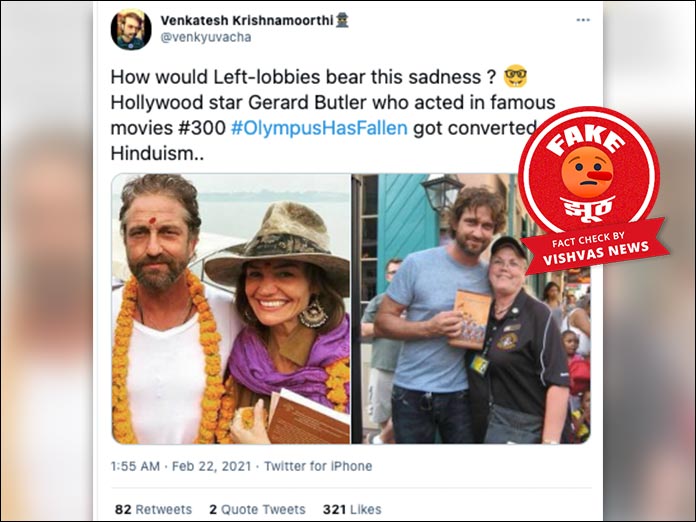 New Delhi (Vishvas News). A collage of Hollywood actor Gerard Butler is viral on social media with a claim that he converted to Hinduism.

A viral picture of Hollwood actor Gerard Butler is viral with a claim that the Hollywood star who acted in famous movies #300 #olympushasfallen got converted to Hinduism. The archived version of the post can be seen here. We also found the pictures shared with similar claims even on Twitter.

We searched on the Internet for news and found an article stating, “Gerard Butler celebrated the New Year’s Eve in India, exploring the famous spiritual towns of the country. Butler took to Instagram on 1 January to share a picture from his trip, which shows him perform a Surya Namaskar with the sprawling Himalayas in the background.” The article published on 2 January 2020 with pictures, had sourced them to the original Instagram profiles.

We found the first picture in the viral collage on Indian actor Yash Birla’s Instagram with caption reading, “Rishikesh is rising , London has not fallen.. 300 percent ..a day well spent and most memorable in the resonance of the holy Ganges @gerardbutler”.

We also found the other image on a private boutique owner Avipeshwani’s Instagram captioned, “A long conversation with Gerard Butler and Morgan Brown at Yoga Retreat by Safarnama…”

Vishvas News contacted Jamie Burton, Entertainment Reporter at 7Digital, based in London, United Kingdom for verification. “There has nothing been reported in the UK to suggest this. He (Gerard Butler) is from a catholic family and the pictures being used appear to be from a holiday he had in India over the New Year…While it can be said, he appears to be embracing Hinduism in the photos, it can’t really be said that he is converting,” said Burton.

Social scanning of the user Arun K Pillai who shared the viral post revealed that he lives in Doha, Qatar and 271 followers on Facebook.