Fact Check: This claim that KBC is giving online lottery on WhatsApp is false

Vishvas News in its investigation found that this viral message and audio clip in the name of KBC Lottery is actually a scam and readers are urged not to share any personal details with these scammers. 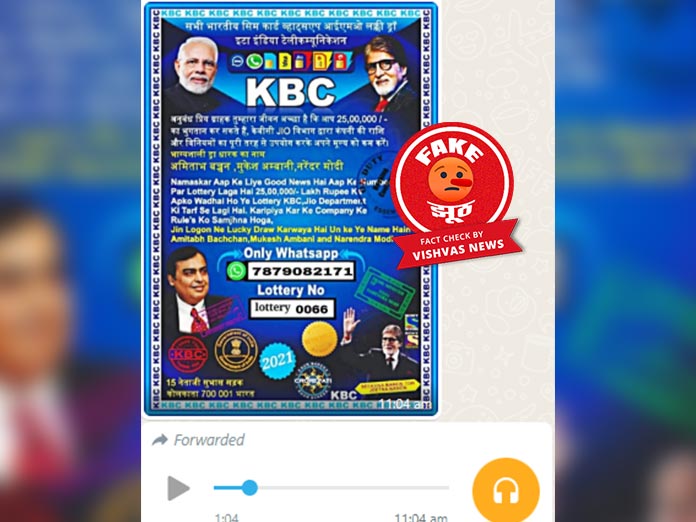 New Delhi (Vishvas News): A message is going viral on various social media platforms, including WhatsApp, in which it is being said that the recipient of the message has won the lottery from the KBC Lucky Draw 2022 contest. Vishvas News investigated the claim and found it to be a scam. Cyber ​​experts advise readers to avoid such hoaxes.

We found a graphic and a voice note on our WhatsApp. It is being claimed in the graphic that the one who got this message is the winner of the KBC lucky draw. The graphic also has a lottery number with the images of actors Amitabh Bachchan, Prime Minister Narendra Modi, and capitalist Mukesh Ambani as well as the logos of State Bank of India and various mobile operators. A mobile number is also written on the banner. The message is accompanied by a voice note which claims that the person is calling from WhatsApp Customer Office, New Delhi. The voice note claims that this number has won Rs 25 lakh. It states that the lottery amount has reached the State Bank of India in Mumbai and the number on the banner is that of its manager. Also, the person tells that you have to save the number and then make a WhatsApp audio call.

Vishvas News in its investigation first made a normal call on the number given on the banner. The bell rang on this number but no one picked up the phone. The name that came with this number on Truecaller was “Lottery Manager”.

Vishvas News also checked the number through WhatsApp. The person who had this number had written ‘Lottery Manager’ in his bio. On picking up the WhatsApp call, he told us his name is Aman Baghel. He asked us about the lottery number, our name, and the place. We gave him the wrong details. After a few seconds, he confirmed that we have won the lottery. He told us, that our lottery amount has arrived in Mumbai State Bank, and to get it we have to tell him our bank account number. Also, to initiate the transaction and confirm the ID, we have to tell him the OTP.

No bank ever asks you for OTP. We hung up and blocked this number.

When we did a keyword search, we could not find any confirmation about any such lottery by KBC but we found a tweet by Ahmedabad Police in 2019 and 2021. In the tweet, the police had described it as a new way of cheating and appealed to the people not to fall prey to it.

Economic Offenses Wing Cyberabad had also posted about this fraud in a tweet.

We also got information about KBC Lottery Fraud on the website of Delhi Cyber ​​Cell.

Vishvas News reached out to cyber security expert Mahesh Rakheja in this regard and asked him about this viral KBC lottery message. Rakheja said, “This scam has been going on for a long time. People should understand that if they have not applied for the lottery or have not bought it then there is no chance of winning. This can empty your accounts. stay alert. Do not call on such numbers. And block them immediately.”

Conclusion: Vishvas News in its investigation found that this viral message and audio clip in the name of KBC Lottery is actually a scam and readers are urged not to share any personal details with these scammers.