Fact Check: This image is not of a tea stall in London Airport, viral claim is fake 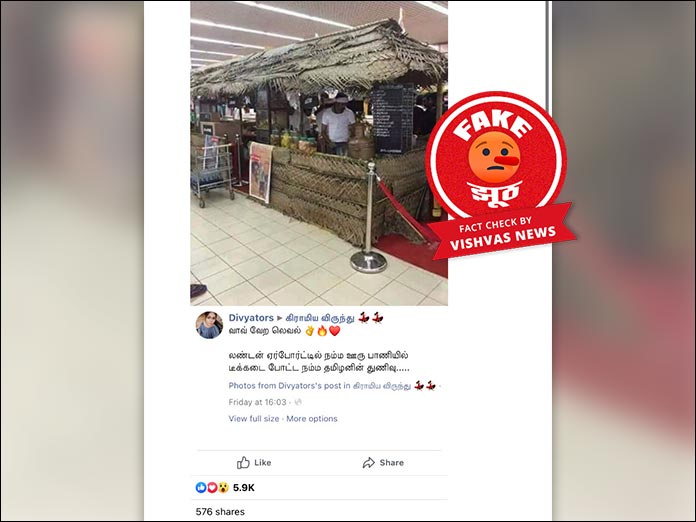 New Delhi ( Vishvas News). A photo of a tea stall in a cadjan is viral on social media with a claim that a Tamil speaking man has set this up at London Airport.

Vishvas News investigation revealed the claim is fake. This picture is from Lulu International Mall, Kochi in Kerala.

Sharing the picture of a tea stall in a cadjan, Facebook user Divyators wrote, “Tamilan style tea stall at London Airport.” The archived version of the post can be seen here. We found this claim is viral even since 2016 as from London Heathrow Airport.

We searched on the Internet for the original source of the image using Google reverse image search tool. We found this in a tweet posted on 12 March 2016 identifying its location as inside Lulu Mall, Kochi.

Vishvas News contacted Lulu International Mall, Kochi for verification. “This is an old picture of a temporary tea stall in our mall. We use to make such interesting set ups once in a year at our super markets,” said an official from the managing department.

Social scanning of the user who shared the viral post revealed that she is from Changi, Singapore and has 5,962 followers on Facebook.

Conclusion: The viral post is fake. This is not a tea stall at London Airport. It is a picture of a temporary tea stall set up at Lulu International Mall, Kochi in Kerala.