Fact Check: This is not a miraculous river that appears for a month out of nowhere, the viral claim is fake

Vishvas News found in its investigation that this is not a miraculous river. The viral claim is false. 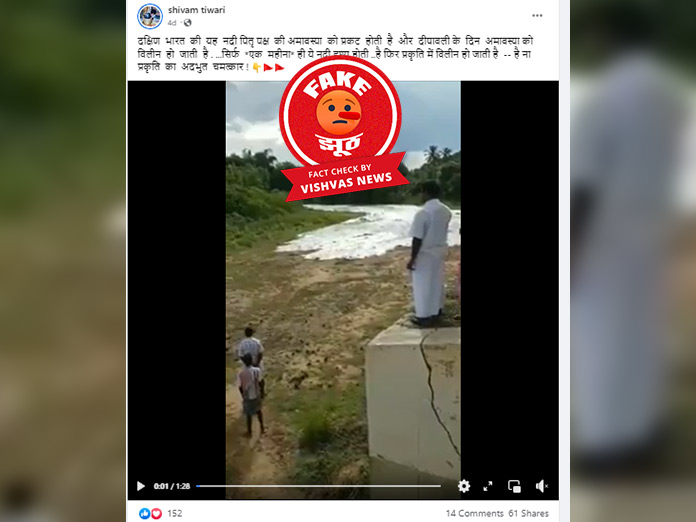 New Delhi (Vishvas News). A video is viral on social media where a stream of water can be seen flowing over a dry land and people paying respect to it. The post is claiming that this is a river in South India, which appears miraculously every year on Pitra Paksha and dries up again on Diwali. Vishvas News found in its investigation that this is not some miraculous river. The viral claim is false.

Vishvas News received this video to be checked on its tipline chatbot number +91 95992 99372 with the caption “Translated: This river of South India appears on the new moon of Pitra Paksha and disappears on the new moon day of Deepawali. This river is visible only for a month and then it merges with nature – isn’t it a wonderful miracle of nature!

This video is also quite viral on Facebook with the same claim. Archive links to these posts can be found here and here.

We searched the screengrabs of this video on Google reverse image. We found this video uploaded in 2017 on a YouTube channel named B PRABHU. The video description read, “Kaveri waters reached Mayavaram district in Tamil Nadu”.

We also found the same video uploaded in 2017 on a YouTube channel named Hindu Pad. The video was captioned “Watch How River Cauvery arrives in Mayavaram village in Tamil Nadu | Divine Blessings of Kaveri Mata”

On searching, we came to know that Mayavaram is also known as Mayiladuthurai.

Searching with keywords like Maha Pushkaram, Cauveri River, Mayavaram, and Mayiladuthurai, we found a news report on deccan chronicle dated 10 September 2017 that read “Anticipating the release of water from Kallanai dam to replenish the Cauvery river and with a prayer to rain god Varuna on their lips, organisers of the Cauvery Pushkaram 2017 have built a make-shift bathing ghat at Thula Kattam in Mayiladuthurai to enable pilgrims to at least collect water and sprinkle it on their heads. Also, the organisers anticipate five lakh pilgrims to throng the mega event from September 12- 24.”

According to a report in The Hindu on 19 September 2017, water was released from the Mettur dam for Maha Pushkaram.

We called Mayurnathar Temple at Mayiladuthurai for confirmation, where we were told that Maha Pushkaram is a 12-year Kumbh, when taking a dip in the river Cauveri is considered auspicious and for Maha Pushkaram in 2017, water was released from the Mettur dam, which reached Mayavaram. We also shared this video with the temple’s manager Kishore Unli, who told us that he cannot tell whether this video is of Mayiladuthurai or not, but it is a matter of fact that South India does not have any such miraculous river that appears every year for a month and then disappears.

We contacted MS Dhandapani, a senior journalist with Tamil Nadu newspaper Dinamalar, regarding this. He said, “It is not a miracle. If water is released from the Muttur dam, it comes to Tamil Nadu. There is no such miraculous river here, which appears miraculously for one month in a year.

Tamil Nadu journalist Ramya Kanan of The Hindu also said, “There is no miracle in this. When Cauvery water is released from Karnataka due to overflow or any other reason, it reaches Tamil Nadu. It happens almost every year.”

We also contacted the Geological Survey of India regarding this matter. Responding to our mail, experts from the Geological Survey of India said, “The information given in the viral post is wrong. There is no such natural phenomenon, where a river is born out of nowhere. This happens when water is released from a dam. The incident seen in the viral video is also of water being released from one such dam.’

The video was shared by a Facebook page named Shivam Tiwari. This page has total 1.5K followers.

Conclusion: Vishvas News found in its investigation that this is not a miraculous river. The viral claim is false.