Fact Check: This is not a new Mumbai ‘BEST’ bus; edited photo of a London bus viral with fake claim

The viral image of the bus being shared as that of a new entry of double-decker bus in Mumbai’s BEST bus is actually image of a bus from London. Viral claim is fake. 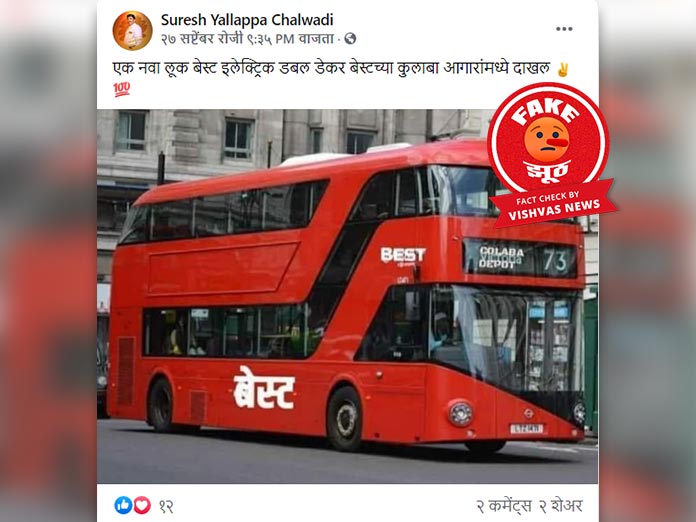 New Delhi (Vishvas News): Vishvas News came across a picture being widely shared on all the social media platforms. The picture shows a double-decker red coloured bus, which has ‘BEST’ written in both Marathi and English. Over the bus, ‘Colaba depot’ too is written. Vishvas News in its fact check found out that the image of bus is from London and not anywhere in India, including Mumbai.

Translation: New look of the BEST Electric double-decker bus that has arrived in the Colaba depot.

We started our fact check with a simple Google Reverse Image Search method.

We found the exact same image (zoomed out) on the wikipedia page of Double-decker bus. Nowhere did we see BEST written on bus in the original picture.

The caption mentioned in the webpage was: A New Routemaster bus operating in London

This clearly suggests that the picture is not from Mumbai but, London.

When we clicked on the picture for more details, Vishvas News found out that the bus had Victoria written over it. And the number plate of the bus was also same as that of the one on the viral image.

According to Wikimedia, the picture was clicked on June 25, 2015.

According to flickr.com, the photographer of this picture is a person named Martin.

This was now confirmed that the picture is from London.

Vishvas News in the next step of investigation got in touch with the PRO of BEST. Manoj Varade said, “The image being circulated is fake. This bus has not been introduced in Mumbai’s bus services. Also the logo of BEST has been pasted on the image of bus.”

Vishvas News in the last step of investigation did a social background check of the Facebook user who shared the viral post. We found out that Suresh Yallappa Chalwadi is a resident of Mumbai.

Conclusion: The viral image of the bus being shared as that of a new entry of double-decker bus in Mumbai’s BEST bus is actually image of a bus from London. Viral claim is fake.