Fact Check: This is not new Rs 500 note, viral claim is fake

Vishvas News found that the viral image of Rs 500 note is morphed. Such currency is not under circulation in India. Neither are there reports of introduction of same. 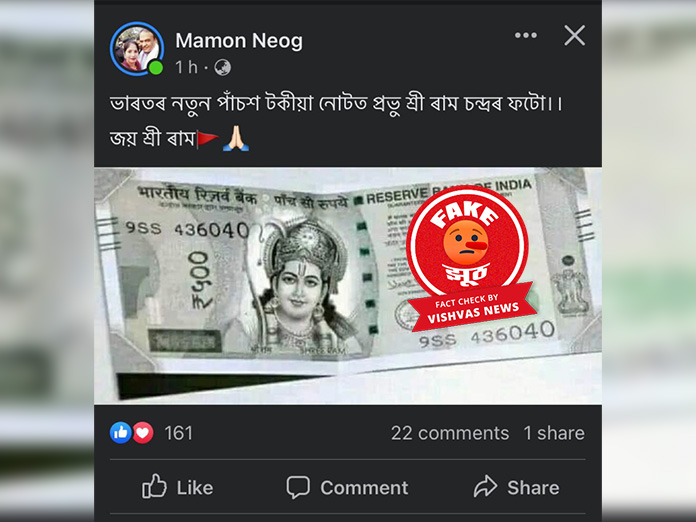 New Delhi (Vishvas News): Vishvas News came across a post being widely shared. The image shows a 500 Rs Indian note with a picture of Lord Ram on it. Vishvas News in its investigation found the image to be edited.

We found the original picture on shutterstock.com, the note here was a normal Rs 500 note. It did not have Lord Rama picture on it.

It was now evident that the currency was edited.

We also found various applications online, which would be used to create the edited currency using the editing tools.

Vishvas News did not find any news reports stating that this currency would soon be under circulation.

In the next step of investigation, we reached out to business journalist and deputy editor of Dainik Jagran, Manish Mishra, who also denied any such news reports and told that the image is fake.

Vishvas News has also reached out to the department of communications, RBI. The fact check will be updated once they respond.

Vishvas News has also reached out to former senior finance journalist, Sopan Pandhripande. He said that sharing such edited posts is sheer madness. This image is morphed.

We also contacted freelance finance journalist Ateeq Shaikh who also confirmed that the photo is morphed and edited. The post is fake. There is no such new Rs 500 note.

In the last step of investigation we did a background check on the Facebook user who shared the post, Mamon Neog is followed by 538 people and hails from Jorhat, Assam.

Conclusion: Vishvas News found that the viral image of Rs 500 note is morphed. Such currency is not under circulation in India. Neither are there reports of introduction of same.