Fact Check: This is not the video and audio sent by NASA’s Perseverance Rover from Mars, the viral post is fake

Vishvas News investigated the post and found that the viral video and audio has no connection with Perseverance Rover. 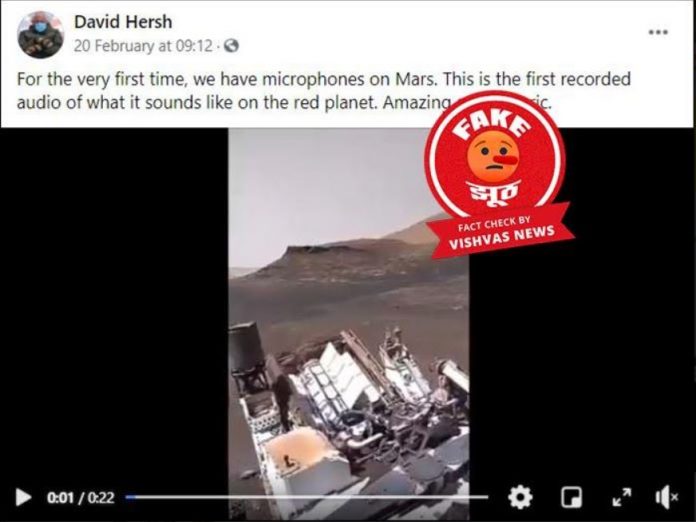 Facebook user David Hersh posted the video with the caption: ‘For the very first time, we have microphones on Mars. This is the first recorded audio of what it sounds like on the red planet. Amazing and historic.’

Vishvas News used the Invid tool to get the screengrabs from the viral video and then run a Google reverse image search on one of the screengrabs. We found a report published by NASA on March 4, 2020, with the title “NASA’s Curiosity Mars Rover Snaps Its Highest-Resolution Panorama Yet”. This report also includes a panorama video.

We watched the video carefully and found that many of the parts including the rover match the viral video.

We also found a 26 seconds long viral video on Twitter with a claim that the video is sent by Perseverance rover, but this video has different audio. We found “Curiosity” written at the end of this video. We observed that “Curiosity” was written on the Curiosity rover in the same font style which can be seen in the panorama video sent by the rover.

We compared the top view of the rover from the viral video with the image of the Perseverance rover and found that both the rovers are different. One can clearly see the different positioning of Sundial on both the rovers.

We ran a search to know the sound in the viral Twitter post and found that it was the sound of most likely Mars quake, detected by NASA’s InSight lander’s Seismic Experiment for Interior Structure (SEIS) instrument. NASA reported the same in April 2019. One can listen to the sound in this article. This is the first time NASA has sent a microphone to Mars through Perseverance Rover.

For further information about the viral video, we reached out to Alana R. Johnson, the Senior Communications Specialist at NASA. He told us that the viral video and audio has no connection with Perseverance rover but seems to be a fan-made work. For the latest information about the Perseverance rover, one can visit the official website or the verified social media handles of NASA.

We scanned the account of Facebook user David Hersh who shared the viral video. We found that the user is based out of Rochester, US.

Conclusion: Vishvas News investigated the post and found that the viral video and audio has no connection with Perseverance Rover.