Fact Check: This Isn’t A Cash Giveaway From WHO; Viral Post Is Fake

The post claiming that World Health Organization (WHO) is giving cashaway to public for completing the survey and sharing to 15 Whatsapp friends is fake. 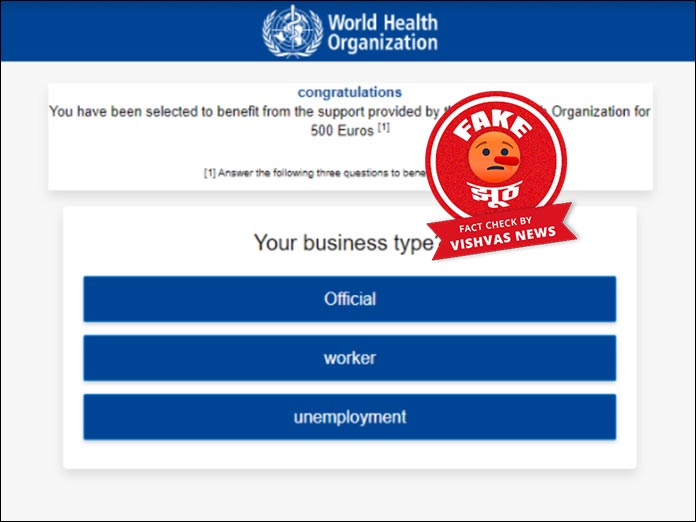 New Delhi (Vishvas News): Vishvas News received a post on its Whatsapp tipline for fact check. The post claims that World Health Organization (WHO) is giving cash to the public. The message is also prompting users to answer some questions and share the message to 15 friends on Whatsapp to avail the benefits.

Vishvas News investigated and found the post to be fake. It is an engagement bait scam.

The post received by Vishvas News on its Whatsapp tipline reads: “Congratulations. You have been selected to benefit from the support provided by the World Health Organization for 500 Euros.” It also asks users certain questions and follows certain steps.

“After considering your answers, set the subsidy amount to 300 Euros and complete the steps to obtain the withdrawal code from the electronic counter.” It also prompts users to share the message to 15 friends to avail to benefits.

Vishvas News searched the scheme on the official website of WHO. There was no such announcement on their website.

We scanned the social media accounts of WHO but didn’t find any report where they proposed any such scheme.

However, on the Facebook page of WHO Regional Office for Europe and World Health Organization African Region we found a post where they have called the viral message as fake.

The message on the WHO page reads: “Various fraudulent schemes purporting to be from or associated with WHO have been circulating, with many requesting personal information or money in exchange for funds or other benefits.“

The WHO page cautioned the readers that claim that WHO is offering cash awards to respondents of a survey are fraudulent.

Vishvas News contacted Technical Officer, WHO Health Emergencies, SEARO and she said that the message is a scam.

Conclusion: The post claiming that World Health Organization (WHO) is giving cashaway to public for completing the survey and sharing to 15 Whatsapp friends is fake.