Fact Check: This photo of film Samrat Prithviraj’s promotion is from Delhi’s Chanakya cinema, not the BJP office

The viral claim turned out to be false in the investigation of Vishvas News. This picture is not of BJP office, but of PVR cinema hall. 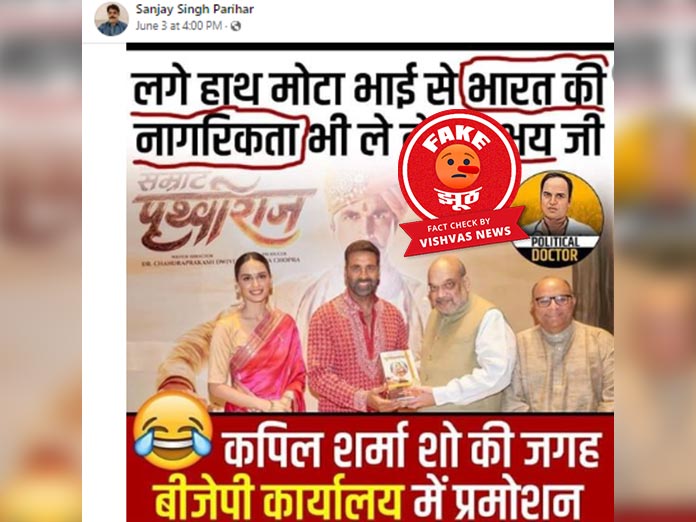 New Delhi (Vishvas News). A picture is viral on social media where Home Minister Amit Shah, actors Akshay Kumar and Manushi Chhillar, and film director Chandra Prakash Dwivedi can be seen in front of the poster of the recently released film Samrat Prithviraj. It is being claimed with the post that this picture is of the BJP office where the film has been promoted. The viral claim turned out to be misleading in the investigation of Vishvas News. This picture is not of the BJP office, but of the PVR cinema hall.

To investigate the viral claim, Vishvas News searched this picture through Google reverse image. We got the viral picture on many websites. A news report on zoomtventertainment.com carried the same picture. According to this report, this picture is from the special screening of the film Samrat Prithviraj that was held in Delhi. The news, in the end, states that this screening was held in Delhi’s Chanakya Cinema.

We found this picture in a news report on aajtak.in as well. The news report was filed on June 2. According to the news, the picture is of a special screening of the film Samrat Prithviraj held at Chanakya Cinema Hall in Delhi.

We spoke to Anubhav Singh, the press in-charge of Delhi’s Chanakya ECX, to confirm this. He confirmed that “the picture is of Chanakya ECX in Delhi where a special screening of the film Samrat Prithviraj was held on 2nd June.”

Vishvas News, in the last phase of the investigation, conducted a background check on the profile that shared the viral post. We found that the user ‘Sanjay Singh Parihar’ is followed by more than 3000 people. The user is a resident of Chhattisgarh.

Conclusion: The viral claim turned out to be false in the investigation of Vishvas News. This picture is not of BJP office, but of PVR cinema hall.