Fact Check: This picture from from a Bangladeshi short film viral with fake claim 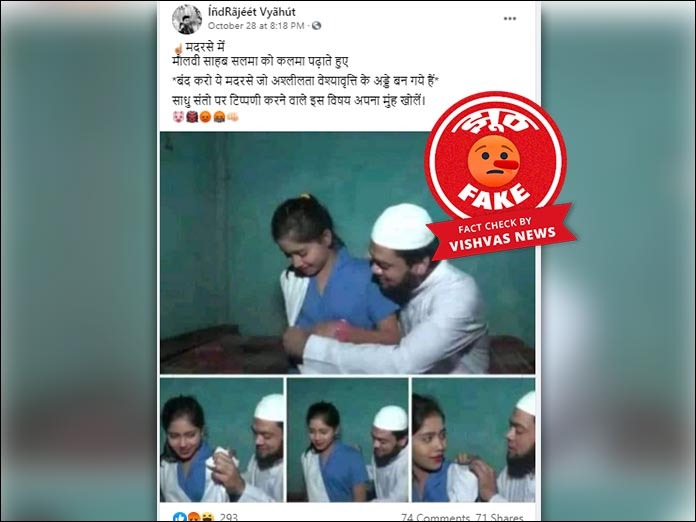 New Delhi (Vishvas News). A collage of four pictures of a girl in school uniform along with a man in objectionable position is viral on various social media platforms with a claim that this happened in Madrasa.

Vishvas News investigation revealed the claim is fake. We came to know that the scene of a Bangladeshi film is now viral with fake claim.

Facebook User Indrajeet Vyahut shared a collage of four pictures of a girl in school uniform with a man in objectionable position writing, “…* Stop these madrasas which have become the bases of obscenity prostitution.”
The archived version of viral post can be seen here.

We searched on the Internet using Google reverse image tool to find the original source of the pictures. We found the viral collage in a video uploaded on 20 September 2020 by a verified YouTube channel Anna Bala. We could see this pictures after 7 minutes in the video. It is of short film directed by Ataul Haq.

We contacted Ataul Haq for further clarification. “The viral picture is a scene from my film produced to spread awareness about sexual exploitation and sexual offenses,” said Haq.
We also contacted Ikbar Kabir, president of Bagherpara Press Club, Bangladesh to verify this post. “These pictures are screenshots of a Bangladeshi short film. They are viral with false claims in Bangladesh also,” said Kabir.

Conclusion: The viral post is fake. The screengrabs of a scene from a Bangladeshi short film is viral with fake claims.