Uttar Pradesh police is not running any mask checking campaign for coming 30 days. Claim with the viral post is fake. 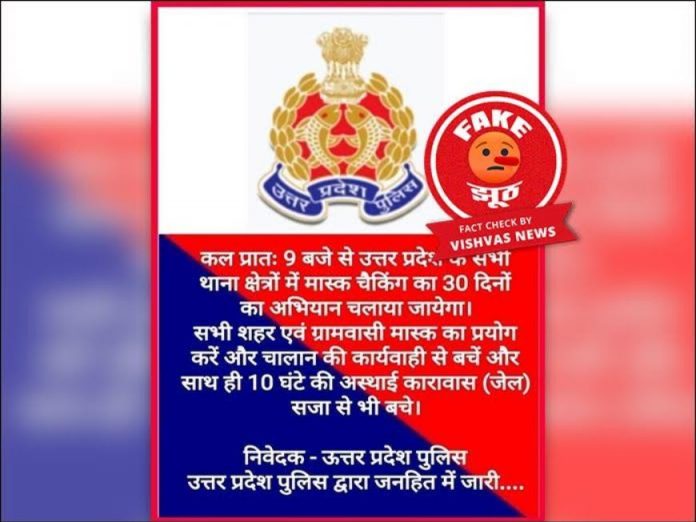 New Delhi (Vishvas News). A viral post on social media claims that Uttar Pradesh police is going to run a 30 days mask checking campaign. Those who will found without a mask will have to pay Chalaan and can also be sent behind the bars for 10 hours.

Vishvas News investigation revealed the claim is fake. Neither Uttar Pradesh police have issued any such message nor the department is running any such campaign for the time being.

Facebook user Tarun Sharma uploaded a post on February 25 with a text in Hindi that roughly translates: From tomorrow morning at 9 am Uttar Pradesh police is starting its 30 days mask checking campaign in all the areas. Urban and rural population is requested to wear mask or else they will have to pay chalaan and can be sent behind the bars for 10 hours. From Uttar Pradesh Police, issued in the public interest.

We started our investigation by running a Google search with appropriate keywords. We didn’t find any media report confirming the viral claim.
Next, we contacted the public relations officer Abhay Nath Tripathi from UP Police. He confirmed that the viral post is fake.

We also found a tweet from the official Twitter handle of UttarPradesh Police. UP Police tweeted on February 26 and clarified that the viral post is not true. UP Police is not running any such campaign for 30 days, do not trust the viral message.

Social scanning of the FB user that shared the viral video revealed that he hails from Bulandshahr, UP. He is active on Facebook since February 2015.

Conclusion: Uttar Pradesh police is not running any mask checking campaign for coming 30 days. Claim with the viral post is fake.