Fact Check: This video on check dam construction project at Munnar is misleading 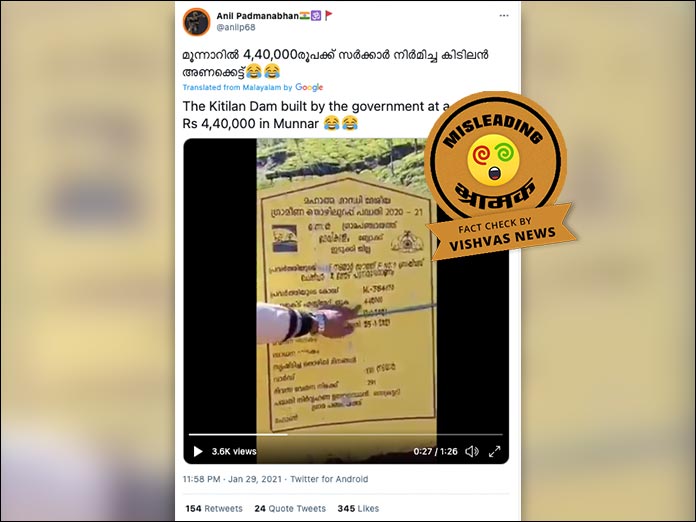 New Delhi (Vishvas News). A video of a man alleging about money laundering scam in a brushwood check dam construction project at Munnar, Kerala is viral on social media recently.

Vishvas News investigation revealed the claim is misleading. The estimated cost of Rs 4,40,000 is for approximately 80 brushwood check dams to be constructed under the Mahatma Gandhi Rural Employment Guarantee Scheme (MGNREGS).

A video of a man featuring a brushwood check dam construction at Nadayar Gram Panchayat of Munnar, Kerala is viral with a criticism that government has built it at the cost of four lakh forty thousand rupees.

Vishvas News searched on the Internet for verification. We did not find authentic news reports on the claim. We searched for the source of the video using Google reverse image search. We found an article published by a regional news website stating, the project aims to construct 12 check dams in different areas and collect water for drinking purposes under the MGNREGS. It clarifies that the propaganda of spending Rs 4.5 lakh to build a check dam was completely false.

Vishvas News contacted Dr Divya S Iyer, Mission Director, MGNREGS for verification. Sharing to us a fake alert post on Facebook, she refuted the claims. She has clarified in the post that the total estimated cost for the construction of around 80 check dams at Munnar Gram Panchayat is Rs 4,40,000 allotted under the MGNREGS. Moreover, only 1.75L has been spent on the project out of which 1.73L was spent on salary for the labourers for 596days, and hence the video is misleading.

Social scanning of the user Twitter user who shared the viral video revealed that he has 5,122 followers and his profile is active since August 2009.

Conclusion: This viral video is misleading. The total estimated cost is for the construction of around 80 check dams.