FACT CHECK: This viral photo is not of Ranchi Ring Road, but Delhi-Meerut Expressway 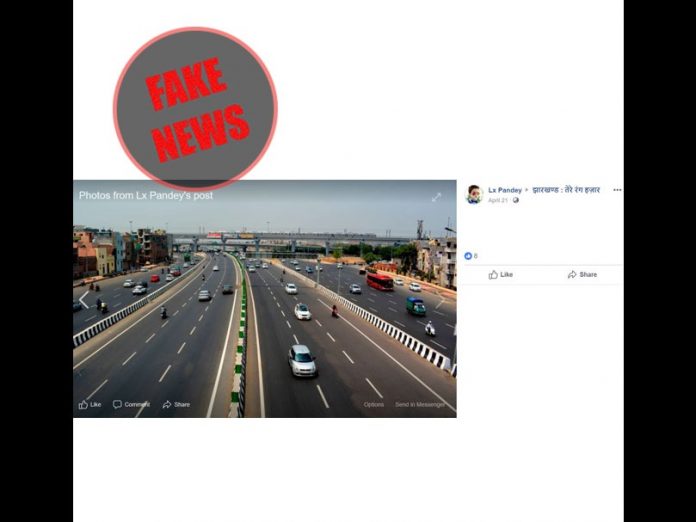 A picture is getting viral on social media in which the expressway is claimed to be the ring road of Ranchi and has been made by Prime Minister Narendra Modi. Vishvas News investigated and found that the picture is fake.

A post is getting viral on Facebook in which two photos have been posted. The caption in the viral post reads: Ring road in Ranchi Jharkhand made by Shri Narendra Modi. The claim is followed by a link.

At first glance, it is learned that the caption given in the photo is click bait. It has been posted to specifically click or to redirect the user to a page/ post/ video.

The link given in this post will open a video. The person has created the video of a park in Ranchi. The person can also be heard telling about that park.

It is clear that the person has posted the video in order to get maximum engagement.

We performed Google reverse image search of the first picture and got some links and photos which showed that the photo is not of Ranchi but that of Delhi-Meerut Expressway.

We checked the comments on the viral post and found that many people have commented that the metro behind the photo is visible and that the metro service in Ranchi has not started yet.

When we searched the second photo of the post using Google Reverse Image, we found the exact image wallpaper on many sites.

The original image can be seen as above. The picture is that of the road show of Prime Minister Narendra Modi on the Delhi-Meerut Expressway. This photo was taken on May 27, 2018, while the viral post was circulated on social media on April 21.

The viral post claiming the expressway as Ranchi’s Ring Road is fake. It is actually Delhi-Meerut Express-Way.

Original post was done by Abhishek Parashar. This is a translated version.