Fact Check: This viral post about lockdown announcement in Assam is misleading 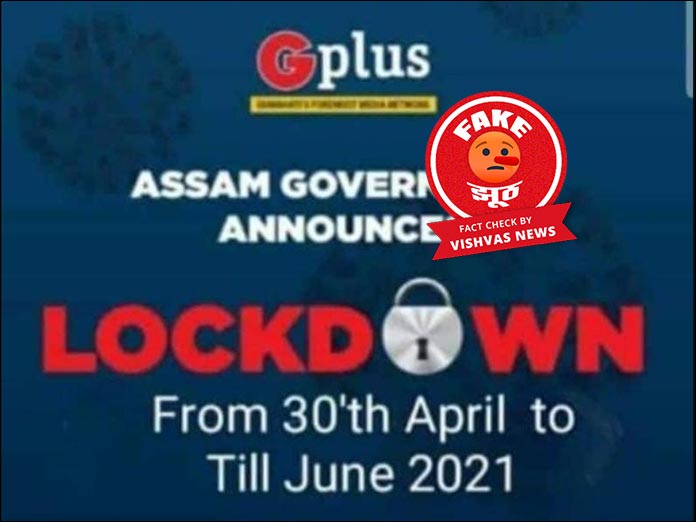 We found in our investigation that the claims made with this viral post are completely misleading. Vishvas News contacted Barsha Das, Senior Journalist with weekly newspaper GPlus. She clarified that the “viral post is completely fake and we have already clarified. The new post has been created by distorting a screen shot of news published on March 23, 2020.”

A news story that there will be a shutdown again across the state has become widely viral on Whatsapp. Post suggests that the Assam government has again declared a lock-down in Assam from April 30 to June 2021.

The first lockdown was announced in Assam on March 23, 2020. With the use of Google reverse image search, we found a post in GPlus’s Facebook Page which was published on March 23, 2020. The graphic was very similar to the viral post, except for the dates. You can view this post by clicking here.

When we compared this March 23, 2020 post clip with the viral post, it became clear that this is an edited version of the same. The similarities between the two can be seen below.

To further investigate, we checked the verified social media handles of govt departments, but nowhere did we find any post asserting the viral claim.

Vishvas News contacted Barsha Das, Senior Journalist with weekly newspaper GPlus. She clarified that the “viral post is completely fake and we have already clarified. The new post has been created by distorting a screen shot of news published on March 23, 2020.” You can see this clarifying in the link here.

Conclusion: No lockdown has been announced in Assam. This post was made using photo editing tool. This post is Misleading.