Fact Check: This viral video is of Chithirai festival in Madurai, not Jagannath Rath Yatra

In the investigation of Vishvas News, the viral claim about Jagannath Rath Yatra turned out to be misleading. The video is from the Madurai Chithirai Festival held in the Madurai, Tamil Nadu. Which is now being shared as Jagannath Yatra. 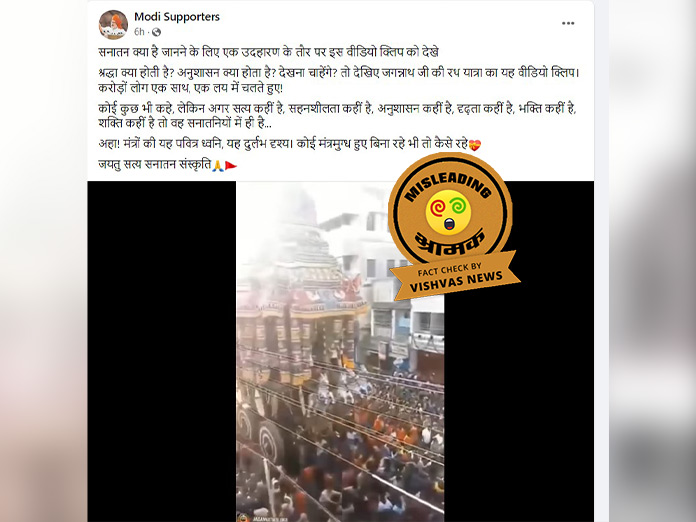 Facebook user Prashant Patil shared this viral video and wrote (English Translation), “Watch this video clip as an example to know what Sanatan dharam is… What is discipline? What would you like to see? So watch this video clip of Jagannath ji’s Rath Yatra. Millions of people walking together, in one rhythm!..anyone may say anything, but if there is truth somewhere, tolerance somewhere, discipline is somewhere, firmness is somewhere, devotion is somewhere, power is somewhere, then it is only in the Sanatanis… Aha! This sacred sound of mantras, this rare sight. How can one remain enchanted without being enchanted…Jayatu Satya Sanatan Sanskriti.”

To know the truth of the viral claim, we extracted several grabs of the video and searched them through Google reverse image. Meanwhile, we found the original video uploaded on May 2, 2018 on a YouTube channel named Balamurugan. According to the information given in the caption, the viral video is from the Chithirai festival held in the Tamil Nadu city of Madurai.

On the basis of the information received, we started searching on Google through several keywords. We came to know that Chithirai Festival is also known as Chithirai Thiruvizha, Meenakshi Kalyanam or Meenakshi Thiru Kalyanam.

Taking the investigation further, we started searching about the Rath Yatra of Chithirai Festival. We found pictures of festivals of different years, where the same Rath is used. This Rath has been used many times for the Chithirai festival. The same Rath has been used in this year’s Rath Yatra as well. After this we searched for the video of Lord Jagannath’s Rath Yatra. The video of the 2022 Rath Yatra can be seen here. The chariot of Lord Jagannath is quite different from the viral video.

At the end of the investigation, Vishvas News did a social scanning of Facebook user Prashant Patil. The user is followed by 742 people on Facebook. According to the information given on the profile, the user is a resident of Gujarat. Prashant Patil has been active on Facebook since 2012.

Conclusion: In the investigation of Vishvas News, the viral claim about Jagannath Rath Yatra turned out to be misleading. The video is from the Madurai Chithirai Festival held in the Madurai, Tamil Nadu. Which is now being shared as Jagannath Yatra.