The video claiming the vitamin B17 deficiency would cause cancer and consuming grapes from Dindigul will cure cancer is misleading. 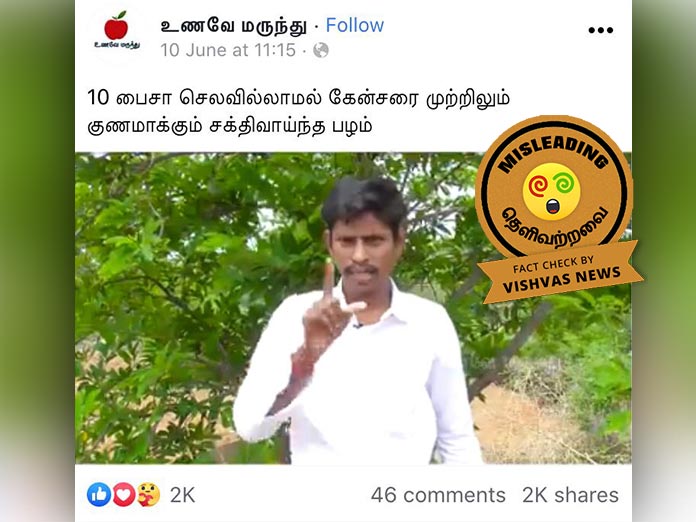 A viral video on social media claims that cancer is due to deficiency caused especially by vitamin B-17, according to the World Health Organisation (WHO). Also, consuming grapes from Dindigul and bitter almonds will cure cancer. The archived post of the video can be accessed here.

When we searched on the Internet to check the claim attributed to the WHO, we found that WHO had no records on linking cancer to vitamin B17 or deficiency.

According to the WHO, cancer is either the result of the interaction between a person’s genetic factors or due to three categories of external agents – physical carcinogens, chemical carcinogens and biological carcinogens.

We also found an UK based research article that stated, some people call laetrile vitamin B17, although it is not a vitamin. According to the research, “Laetrile is a partly man-made (synthetic) form of the natural substance amygdalin. Amygdalin is a plant substance found in raw nuts, bitter almonds, as well as apricot and cherry seeds…Laetrile has been used as an anti cancer agent since the 1800’s…Although, more recent studies have shown that laetrile can kill cancer cells in certain cancer types there is not enough reliable scientific evidence to show that laetrile or amygdalin can treat cancer. Despite this, it still gets promoted as an alternative cancer treatment.”

With grapes as the content of the claim, we found several research articles from authentic sources declaring there is no proven scientific research that consuming grapes would treat cancer.

We also noted that there is a warning to not confuse grapefruit extract with grape seed extract.

According to the article in Memorial Sloan Kettering Cancer Centre (MSKCC) website, “Grape Seed Extract is derived from the oil that comes from ground red wine grapes. The extract contains a substance called proanthocyanidin, which has antioxidant activities… Obtained as a by-product of wine production, grape seeds are ground to produce grape seed oil. Grape seed extract is marketed as a supplement for its antioxidant properties. Only a few initial studies have been conducted to see whether grape seed extract can help cancer patients. Grape seed extract should not be confused with Grapefruit seed extract (also known by the acronym GSE), which has different biological effects”.
However, MSKCC also clarified that although it has antioxidant properties, grape seed has not been shown to treat or prevent cancer.

An article in the Journal of Nutrition states, “Grapes and grape-based products are excellent sources of various anticancer agents”.

Kiran explained that grape seed extract helps in decreasing side effects of chemotherapy and studies on their effect on cancer is going on for years. “There is no conclusive evidence on grapes curing cancer. The grape seed proanthocyanidins (GSPs), which are the active ingredients of grape seed extract (GSE) have helped in prevention more than cure. Non-human trials have potential outcomes in treating skin cancer, prostate cancer and breast cancer,” he said.
According to Journal of Carcinogenesis & Mutagenesis, “Promising results obtained in vitro as well as on animal studies suggest that GSE may have a great relevance as source of potential new pharmacological molecules, and could represent an important opportunity for clinical research”.
Conclusion

Conclusion: The video claiming the vitamin B17 deficiency would cause cancer and consuming grapes from Dindigul will cure cancer is misleading.