Fact Check: No, these aren’t fake cashews manufactured by machine, these are cashew-shaped snacks

No, the viral video doesn’t show fake cashews in market. These are cashew-shaped snacks made of flour that that being manufactured by snack manufacturing machine. 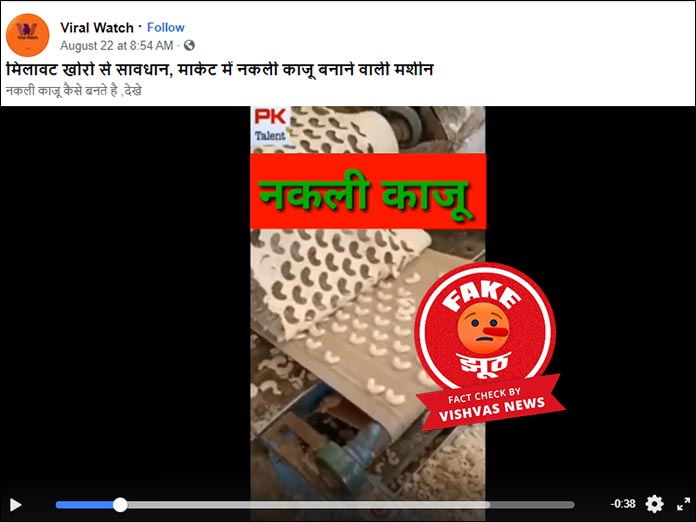 The video shared on Facebook by a video platform named Viral Watch shows a machine is cutting out cashew-shaped objects from a white sheet. It has been claimed that fake cashews are being made. The archived version of the post can be checked here.

We started our investigation by performing Google Reverse Image Search of the screengrabs we extracted from the video when we used the InVID tool.

We found the same video on a Youtube channel ‘Tushar Pandya’. The video was titled ‘Kaju Nimki Making Machine.’

When we investigated the channel we found that Tushar Pandya manufactures machines for snacks.

We further investigated and found the same video on the Twitter account of Tushar Pandya stating that the machine shown in the video manufactures cashew-shaped snacks. The video showed the machine from different angles and also the end product of the cashew snack.

He said: “This is the fake claim that says the machine is manufacturing fake cashews. It is a snack made of flour. The machine shows the cutting of a flour sheet in the shape of cashews. It is sold as a snack and is roasted before eating.”

We scanned the profile of the Facebook user who shared the viral post. Viral Watch is a video platform and has 331 followers.

Conclusion: No, the viral video doesn’t show fake cashews in market. These are cashew-shaped snacks made of flour that that being manufactured by snack manufacturing machine.