Fact Check: Video of Congress Candidate During A Stage Breakdown in Bihar Viral As That of BJP Candidate 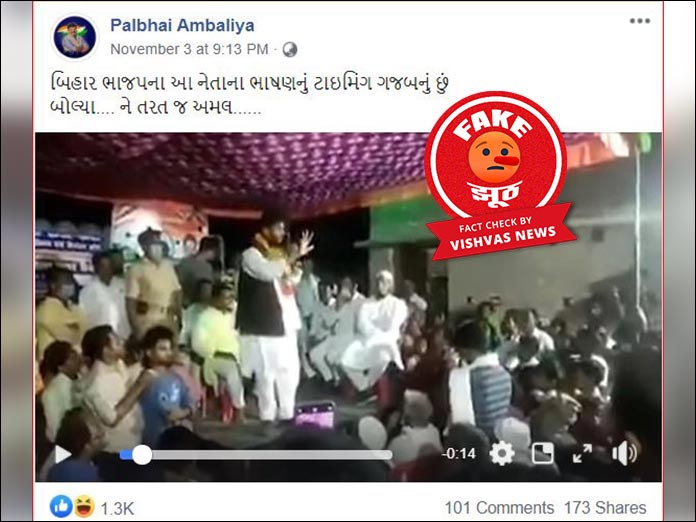 New Delhi (Vishvas News): Bihar election may have ended, but the misinformation around it hasn’t come to a halt. A video of the Congress leader’s falling after the stage breaks down is going viral claiming that he belongs to BJP.

Vishvas News investigated and found that viral post to be fake. During the Bihar Assembly elections, this incident took place with the Congress candidate Mashkoor Usmani from Jale Assembly seat in Darbhanga district. Some people made it viral by associating it with the BJP leader.

Facebook user Palbhai Ambaliya claimed in Gujarati on November 3, uploading a video claiming in Gujarati language roughly translated in English: The timing of the speech of this leader of Bihar BJP is amazing, whatever he said was immediately implemented.”

The archived version of the viral post can be viewed by clicking here.

Vishvas News performed the Google Reverse Image Search of the screengrabs of the viral video that we extracted using the InVID tool. During the search, we found the viral video in many online reports.

This video was also used in live news on October 29, 2020, on the live Hindustan website. According to the news report, when Congress candidates were speaking from the stage in Bihar, their stage broke at the same time. It was explained in the news report that Congress candidate Mashkoor Osmani had reached from Jale Assembly seat in Darbhanga district to seek votes in his constituency. His stage broke while he was addressing a public meeting at that time. The news report can be read here.

During our investigation, we also found the original video on ANI’s Twitter handle. It was uploaded on October 29, 2020. This report also mentioned that a Congress candidate Mashkoor Ahmad fell from the stage after the stage broke.

Vishvas News spoke to Sanjay Upadhyay, the Bureau Chief of Dainik Jagran of Darbhanga regarding the matter. He told that the viral video is of a Congress candidate and not of a BJP candidate.

We scanned the profile of the Facebook user Palbhai Ambaliya who shared the viral post. We found that the user is associated with a political party. Their page is followed by more than one lakh people. The user is based out of Gujarat.

Conclusion: A video of the Congress leader’s falling during the stage breakdown is going viral claiming that he belongs to BJP.