A video of death at the Cooper Hospital in Mumbai has gone viral with the fake claim that the patient’s kidney was removed in the Nagpur-based hospital. 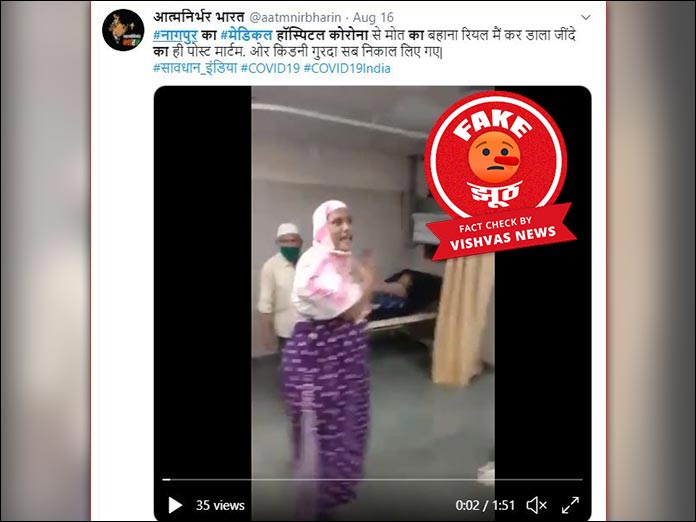 New Delhi (Vishvas News): A video going viral on social media shows some people in the hospital expressing outrage. It is being claimed that in Nagpur Medical Hospital, the postmortem was conducted of an alive person and his kidney was removed.

Vishvas News investigated and found that the viral video has no connection with Nagpur Medical Hospital. The video of the July 19th from Mumbai-based Cooper Hospital is viral with a fake claim.

The Twitter handle Self-Reliant India uploaded a video on August 16. The video claimed: “In Nagpur’s Medical Hospital, the kidney of the patient was removed and the excuse was made that the patient had corona. Postmortem of an alive person was done. # Careful_india # COVID19 # COVID19India.”

While searching, we found a 22-second clip of the viral video on the Twitter handle of ANI news agency. The video was uploaded on July 21, 2020. In the video, it was told that on July 19th, 2020, the family created a ruckus after the patient’s death while he was undergoing a treatment at the Cooper Hospital in Mumbai. Watch the full video here.

During the search, we also found a news on jagran.com website. The news was published on July 22nd. The report stated that after the death of the patient at the Cooper Hospital in Mumbai, the family members got angry and were expressing outrage. View full news here.

During our investigation, we also found a news on India TV’s YouTube channel where the viral video was used. It was reported that the patient died soon after the doctor gave him an injection. The incident happened in Cooper Hospital in Mumbai.

We scanned the profile of the Twitter user who shared the viral video. We found that his profile was created in July 2020.

This fact checked article can be read in Marathi and Hindi as well.

Conclusion: A video of death at the Cooper Hospital in Mumbai has gone viral with the fake claim that the patient’s kidney was removed in the Nagpur-based hospital.