Fact Check: Video of crocodile attack in Mexico viral in the name of Gorakhpur

This claim turned out to be false in the investigation of Vishvas News. Actually, this video is from Mexico. 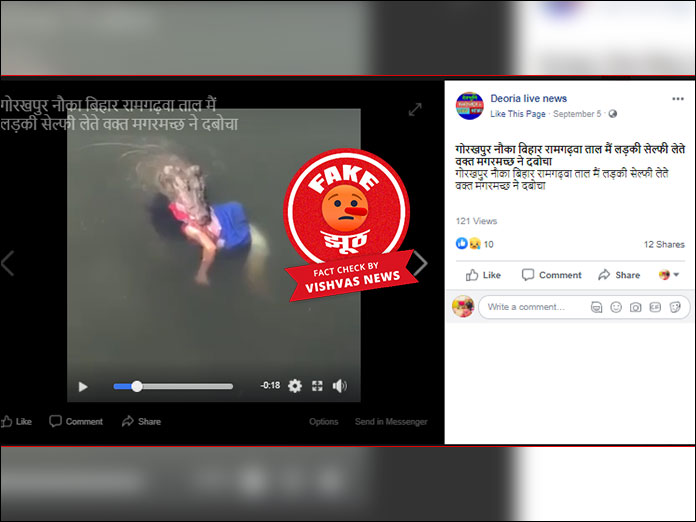 Vishvas News (New Delhi). In a viral video, a crocodile can be seen swimming in the water with a woman clutched in his jaws. Many social media users are sharing this video and claiming that the video is from Gorakhpur, where a crocodile attacked and killed a woman taking a selfie in the Ramgarhtal. This claim turned out to be false in the investigation of Vishvas News. Actually, this video is not from Gorakhpur. This video is from Mexico.

To investigate the post, we extracted screengrabs of this video with the help of Invid tool and then reverse-image searched these screengrabs with keywords. We found this video in a news article on worldstarhiphop.com. According to the news, the video was from Mexico.

We also found news on this incident on mexicodailypost.com. According to the news, this video is from Mexico where a crocodile attacked and killed a woman on the coast of Laguna del Carpintero.

Vishvas News, furthering its investigation, searched on the Internet whether any such incident has happened in Gorakhpur in the recent past or not. We got a news from Dainik Jagran according to which no crocodile has been seen in Ramgarhtal of Gorakhpur.

We contacted Pradeep Srivastava, the Deputy Editor of Dainik Jagran Gorakhpur, regarding this matter. He told us, “This video is apparently not from Gorakhpur. No such incident has been reported in Ramgarhtal. No alligators have been seen here. The Gorakhpur authorities have also termed the reports of crocodile sighting in Ramgarh Tal as misleading.” “

Now it was time to scan the profile of the user ‘Deoria live news’ who shared the post on Facebook. On scanning the profile, we found that the user has 5,467 followers.

Conclusion: This claim turned out to be false in the investigation of Vishvas News. Actually, this video is from Mexico.