Fact Check: Video of doctor beating patient is not from Kanpur’s Hallet hospital 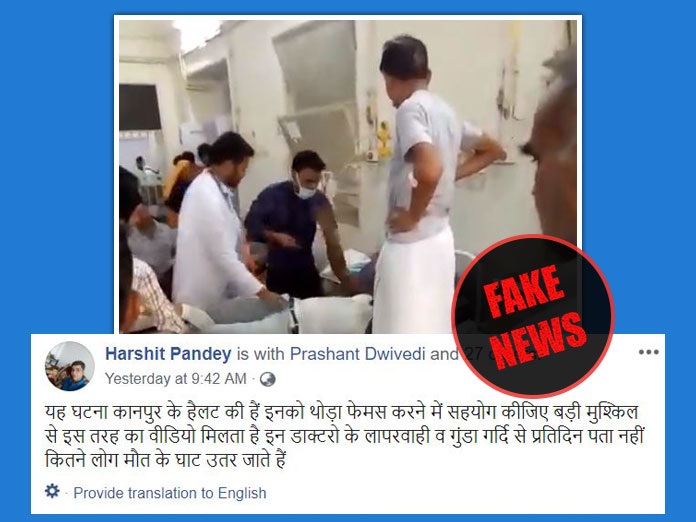 A video is getting viral on social media in which it has been claimed that the incident shown in the video happened in Hallet hospital, Kanpur. In the viral video, a man can be seen beating another man. Vishvas News investigated and found that the viral video is fake. The video is not from an incident that happened in Uttar Pradesh, but some other state of India.

The video has been shared by a Facebook user named Harshit Pandey. The text accompanied by the video reads: This incident happened in Hallet, Kanpur. Lets make them famous. Not sure how many people die due to negligence of such doctors.

When Vishvas News started investigating, it was found that the video got viral few days ago. In the video, it can be seen that it is from a hospital and a patient is being beaten by a doctor. A voice can also be heard with someone saying something in Hindi language “मरीजों को ऐसा मारा जाता है। डॉक्टर मरीज को मार रहा है SMS के अंदर।“ (English: Patients are beaten up like this. Doctor is beating patient inside SMS).

We used InVid and performed a Google reverse image search of all the sreen grabs. We found that the video is made from an incident that happened in Rajasthan.

As per ANI, the incident happened on June 3, 2019 at Sawai Man Singh Medical College. The tweet from ANI stated: A resident doctor had beaten up a patient in Jaipur, Rajasthan. Raghu Sharma, Medical & Health Minister of Rajasthan says, ‘We have asked for a report on the video as to what really happened.’

We also found a report on the web edition of Dainik Jagran dated June 3, 2019 that validates the news. As per Dainik Jagran, “One June 1, a patient (Ramesh) admitted in ward 1C requested the resident doctor for checkup before. He said he is really unwell and if doctor can see him first. When doctor said that he will see him only when his number comes, both got into an argument. Then, the doctor got really angry and started beating up the patient.”

According to the news agency PTI, after the video of the incident has got viral, the Rajasthan Human Rights Commission has saught its report, which will be submitted till June 25.

As per Dr. D. S. Meena, Dean, Sawai Man Singh Medical College, “The video which is circulated on social media seems to be edited. The Disciplinary Committee will investigate this matter and it will be assigned to the Rajasthan Human Rights Commission. The patient is all right and now he has been discharged.”

After this, we researched about the Hallet Hospital in Kanpur. In the news search we came to know that in the beginning of June last year, five patients died due to failure of AC in the ICU of the medicine department of this hospital.

However, the viral video claiming to be that from an incident that happened in Hallet hospital, Kanpur is not true.

The viral video showing a doctor beating up a patient is not from Hallet hospital Kanpur but from Sawai Man Singh Medical College, Jaipur, Rajasthan.